Links below to lots more pages of jokes about these special days. 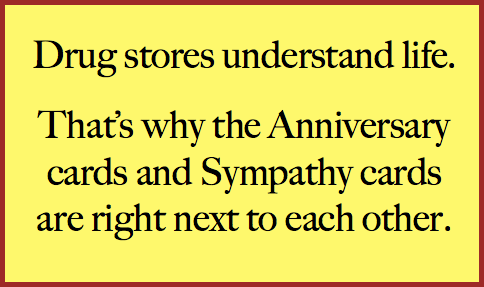 A Physician was speaking about the dangers of certain foods to a large group in Florida.

He told them, "You have to be aware of hidden dangers. Hydrogenated fats are killers. Soda pop mets your tooth enamel and eats away your stomach lining. Most prepared foods are high in sugar, salt, and MSG. Even our drinking water can be harmful if not pure enough.

"But there's one food that's the most dangerous of all. Can anybody tell me what food causes the most grief and suffering even years after consuming it?"

The audience was silent until an older man in the second row spoke up and said, "Wedding Cake?"

A husband and wife in their sixties were coming up on their 40th wedding anniversary. Knowing his wIfe loved antiques, he bought a beautiful old brass oil lamp for her.

When she unwrapped it, a genie appeared. He thanked them and gave each of them one wish. The wife wished for an all expenses paid, first class, around the world cruise with her husband.

Shazam! Instantly she was presented with tickets for the entire journey, plus expensive side trips, dinners, shopping, etc.

The husband, however, wished he had a female companion who was 30 years younger.

It All Went By So Fast

A husband and wife were celebrating 50 years of marriage with a big anniversary party. At one point they were toasted, then asked what it’s like to be married for 50 years.

The wife, known to have a quick wit, replied, “It all seems like five minutes....under water.”

The very first Christmas gifts were NOT wrapped. This is because the people giving those gifts had two very important characteristics:
1. They were wise.
2. They were men.
- Dave Barry

Under the old monogamous system, we didn’t have the problem of apportioning Thanksgiving and Christmas among your mother and stepdad, your dad and his third wife, your mother-in-law and her boyfriend Hal, and your father-in-law and his boyfriend Chuck.
- Garrison Keillor

A growing trend among families is giving their kids a few small presents ahead of Christmas to break up the tension of getting everything on Christmas Day. They actually have an interesting name for this: Hanukkah.
- Jimmy Kimmel

I’d trade all my pets for the bunny that lays the Cadbury cream eggs.
- Melanie White

Here’s an Easter tip: never put all your bunnies in one basket – unless, of course, you want more bunnies.
- Melanie White

If it wasn’t for Easter, hats would probably be extinct.
- Melanie White

Short summary of every Jewish Holiday:
"They tried to kill us, we won, let's eat."

If Halloween were a Jewish holiday, we would give up candy for the day and feel bad about our costumes.
- Andy Borowitz

Day of Atonement is only Jewish holiday that sounds like a video game.
- Andy Borowitz 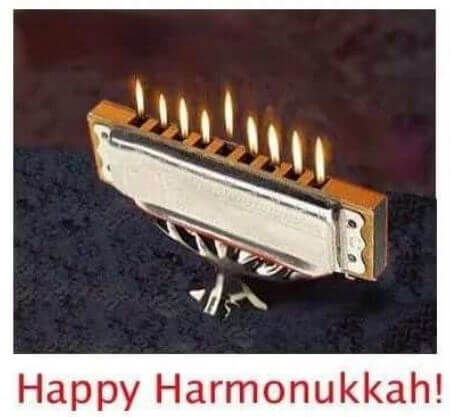 As soon as you are certain your son or daughter is definitely going to graduate from college, you’ll want to encourage them as much as possible to make a success of themselves. The best way to do this is to change the locks on the house.

They say St. Patrick drove the snakes out of Ireland. I wonder if he could do that for congress.

One of the fun things people do on St. Patrick’s Day is eating green food. Fortunately, I always have plenty of that in my fridge.

Check out these Irish Jokes:

This works best in a dormitory or visiting team locker room, but you can also try at home. Even the office if your workplace has showers. Unscrew the shower head and insert a couple of Paas food coloring tabs (used for Easter eggs). When the water heats up, you'll have some very colorful people.

Going hiking? Put a handful of raisins in your pocket. Somewhere along the trail, casually mention that you can identify animal droppings. Palm a few raisins, bend over and pretend to pick some up. Pop them in your mouth and announce that it's squirrel for sure.

Last year on Mother’s Day, the whole family got together for a big dinner and afterward, when Mom started to clean up, I said to her, “Don’t bother with those dishes, Mom. Today is Mother’s Day. You can always do them tomorrow.”
- Joey Adams

Mom, thanks for providing me with love that's as never-ending as your voicemails.
- Damien Fahey

Last Fathers Day my son gave me something I always wanted: the keys to my car.
- Anonymous

Fathers Day is just like Mothers Day, only you don’t spend as much.
- Anonymous

My uncle usually felt a little down on Father’s Day because he never had kids of his own. So I asked him, “Aren’t you and your wife happy with each other?”
“Oh sure," he said. "My wife laughs at everything I do. That’s why we don’t have any kids.”

Valentine's Day reminder for men: Do not give her anything that has a plug. Also do not pre-taste the chocolates.
- Dave Barry

The best part of being married on Valentine's Day is having all your expectations fulfilled. Because you have no expectations.
Just Lee ‏@Just_Lee_

Grocery store flowers on Valentine's Day: show someone you care slightly more than not at all.
Mike ‏@DrVanderschmidt

Our cat doesn't like fireworks so we just let her hold sparklers.
- Just Bill ‏@WilliamAder

Watching fireworks makes me wonder if I remembered to turn off my oven.
- Melanie White 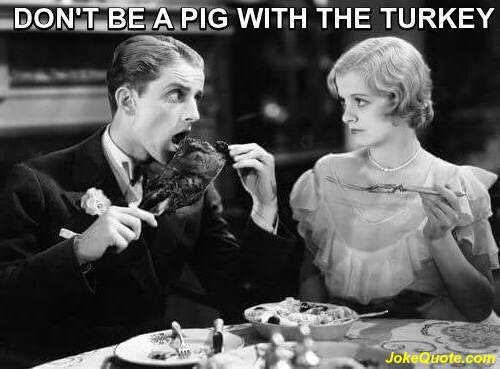 Talking to your family is the secret ingredient in turkey that makes you fall asleep.
- Guy Endore Kaiser

Last Thanksgiving, before the meal was even over, a bunch of my in-laws started checking their Blackberries and iPhones. Don’t they have any respect for tradition. You’re supposed to ignore your family by watching football on TV.
- Kate Deimling

I would count my blessings on Thanksgiving, but my relatives outnumber them.
- Melanie White

In San Francisco, Halloween is redundant.
- Will Durst

How come you’re responsible if you do your taxes in March, but I’m crazy when I do my trick-or-treating in September?
- Guy Endore-Kaiser

Fool me once, shame on you. Fool me every October for 29 years running, congrats you're either Candy Corn or Circus Peanuts.
- Mike Vanatta 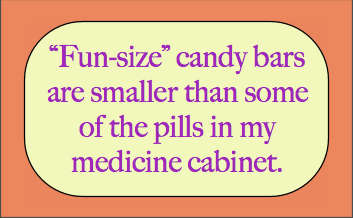 Going to a new year’s party without wearing a tracking device is just asking for trouble.
- Anonymous

New Year's resolution: convince everyone to lower their expectations of me.
- Mike ‏@Mike_Vanatta

This year my resolution is to achieve world peace. That should be easier than trying to get along with my mother-in-law.
- Melanie White