These Xmas jokes are a little naughty, a little nice. So full of Christmas spice you might have to read 'em twice. Hilarious stuff to fool with yule.

I read this in the wall street journal today: The new trend in Christmas cards this year are 'DVD cards' - instead of a letter about your family and what you did this year, you put your yearly memories on a DVD which I really enjoy getting, you know why? They make great coasters.
- Jay Leno

Fun Christmas Trivia: "Myrrh" is the awkward sound you make when you look at your bank balance on Dec 26th.
- Kelkulus ‏@kelkulus

After xmas I return gifts to stores and relatives to where they came from.
- Melanie White

One December, a postman was making his deliveries and pickups, and at one house he came upon a letter addressed to God.

He didn’t intend to read it, but the envelope was not sealed, and the letter fell out and open. He could see it was a plea for help.

The husband and wife were both out of work and had no money for Christmas presents for their little boy. The letter asked for just $20 to help them buy something for their son.

Moved by this, the postman opened his wallet and found all he had was $15 in cash. He all put the money in the envelope, sealed it, and wrote “from God” on the outside.

Two days later at the same house, there was another letter addressed to God. This time he knew what it probably was, so he opened it and read it.

It said, “Dear God, Thanks for the money for presents for our little boy. This really means a lot.

But we asked for $20 and there was only $15 in the envelope. We don’t blame you, God. It was probably those crooks at the post office.”

Recently I had a little too much "fun" at the office Christmas party. Knowing the police were on special alert, I did what they say you should do - I took a cab home.

This proved to be a wise decision, because after only a few blocks there was a police roadblock. They were checking drivers with a breath-alyzer.

But the taxi, being a taxi, was waved right on through. So it was a good decision to take a cab.

Plus, it was easier than I thought, and quite fun driving a cab. It’s really just like any other car.

But now I have this taxi in my garage and I don’t know what to do with it.

So she'll have 10 birds by the time you give her those rings? If you ask me, the first 4 days of Christmas are a bit "bird heavy”.
- Aristotles @AristotlesNZ

Those carolers were wrong. Turns out it was actually beginning to look a lot like me hosing them off my front yard.
- Aristotles ‏@AristotlesNZ

On Christmas Eve I like to put a red ribbon around my neighbor's car, just to mess with him.
- Andy Borowitz @BorowitzReport

Santa saw your Facebook photos. You're getting clothes and a dictionary for Christmas.
- JB ‏@jbmedik

When I receive a Hickory Farms sausage and cheese basket, all I can think about is, "How long has this stuff been unrefrigerated?"
- Just Bill ‏@WilliamAder

I wrap presents with 70% love, 20% paper, and 10% scotch tape and extra paper because I used too little paper at first. And 9% vodka.
- prontopup @prontopup

My wife & I split the wrapping duties this Christmas. Took her 4 hours to do her half. Took me 10 mins in the garage with my paint sprayer.
- Aristotles ‏@AristotlesNZ

It's odd that Americans have to buy Christmas trees. In Canada we just decorate one of the pines growing in the living room.
- Kelkulus ‏@kelkulus

I received a Christmas card from a family I don't recognize and I'm scared.
- Lauren Lapkus ‏@laurenlapkus

But how about Christmas? It's exciting, isn't it? I was up shopping at Bloomingdale's today and I was in the elevator, and Kenny G was playing in the elevator and I gave him a nice tip.
- David Letterman

After being questioned by the Neighborhood Watch captain & talking to the police twice, I've decided it's best not to go Xmas caroling alone
- Just Bill ‏@WilliamAder 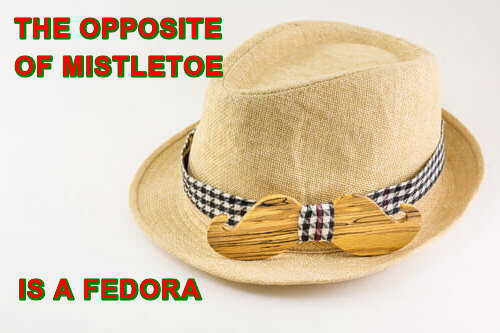 One Christmas Eve, St. Peter welcomed three newly-deceased guys to the gates of heaven. “Christmas is a special time here in heaven,” said St. Peter, “so tonight you have to show me something that symbolizes the season in order to get in.”

The first guy rummaged around his clothes and came up with a lighter. He flicked on the flame and said, “This represents a Christmas candle.”

The second guy pulled some keys out of his pocket and shook them so they jingled. “It’s like the Christmas bells,” he said.

The third guy was at a loss. He couldn’t find anything, until finally he produced a pair of ladies underwear. St. Peter gazed at him suspiciously and said, “And what do those have to do with Christmas?”

The guy said, “These are Carols.”

Secret Santa at the CIA sucks. They torture you until you say who gave what.
- Julius Sharpe ‏@juliussharpe

If holidays were superheroes, Hanukkah would be Aquaman.
- Andy Borowitz

One man's mall Santa is another woman's husband who loaded the dishwasher wrong.
- Eden Dranger ‏@Eden_Eats

I’m entrusting my husband with writing the neighbor's Christmas cards because he has a better recollection of who we're fighting with.
- Thrill Tweeter ‏@Thrill_Tweeter

Have you heard about Adolph, the brown-nosed reindeer?
He can run as fast as Rudolph, he just can't stop as fast.

How is a white elephant Christmas party like an Al Qaeda party?
There’s a whole lot of passing the parcel. 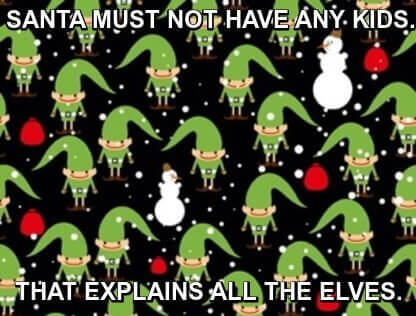 In the spirit yet? Get more like this here:

Or go back from "Xmas Jokes" to "Anniversary Jokes"