Santa jokes make us jolly folks. If Santa brings you laughter, it's the best thing you could ask for. Humor quotes to stoke your cheer and soak your spirit. Ho Ho Ho! Can you hear? Mr. Claus is drawing near.

Santa has it great. I buy all the toys. He gets all the credit.
- Melanie White

Yeah, I saw Mommy kissing Santa Claus. Frankly I thought he was taking advantage of her grief. Grandma had JUST been run over by a reindeer.
- lanyard lou who ‏@lanyardtwerk

The main reason Santa is so jolly is because he knows where all the bad girls live.
- George Carlin

I told the kids the reason Santa can get all those toys into one bag is because he let Mrs. Claus pack it for him.
- Melanie White

Seems hypocritical for Santa to spy on children and then decide what constitutes being naughty.
- Kelkulus ‏@kelkulus

Teenagers should believe in Santa. That way they wouldn’t be lying when they said they knew somebody whose mom lets him stay out all night long.
- Melanie White

Let’s be naughty and save Santa the trip.
- Gary Allan

I wish I were more like Santa. That way I could be jolly even when I have to work all night.
- Melanie White

No one wants to be office Santa since the year I straddled his lap and whispered in his ear that all I want for Christmas is for this to last forever.
- Aristotles ‏@AristotlesNZ

When I was younger, I used to love sitting in Santa’s lap at the shopping mall - and was sad when I finally outgrew it at age 30.
- Bruce Cameron

I haven’t been this excited since I was on Santa’s nice list ten years ago.
- The_martinigirl @The_MartiniGirl

Santa Claus: I bring presents to children around the world.
Easter Bunny: I bring children baskets of candy.
Tooth Fairy: I collect human teeth.
[ others back away... ]
- John Lyon @JohnLyonTweets 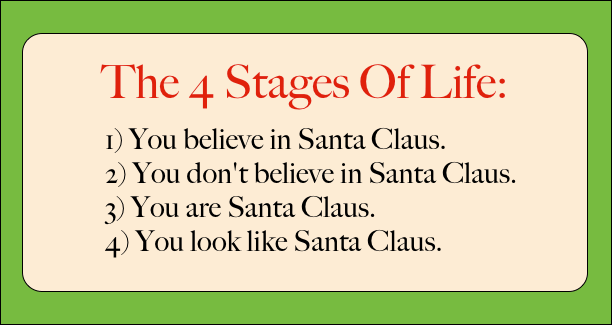 I am writing this note to inform you that inflation has taken away
The things I hold most essential: my workshop, my reindeer, my sleigh.
Now I'm making my rounds on a donkey; he's old, he's ornery and slow.
So if you don't see me this Christmas, I'm out on my ass in the snow.
- (Unknown Author)

The staff would be a lot more likely to believe our boss was Santa Claus at the office Christmas party if he was handing out bonuses.
- Melanie White

Christmas always sucked when I was a kid because I believed in Santa Claus. Unfortunately, so did my parents. So I never got anything.
- Charlie Viracola

To whomever got the half-empty tin of Altoids from your Secret Santa, all I can say is it was that or my stapler.
- Just Bill ‏@WilliamAder

I just wrote to Santa. Told him I need a clearer definition of “naughty.”
- Greg Tamblyn

One thing you can say about Santa: he’s got Christmas in the bag.
- Melanie White

What does Santa have in common with the tooth fairy?
They’re both nocturnal.

I told my kids that Santa is gluten free and lactose intolerant, so we left him some beer and peanuts.

Santa was having a rough December. A bunch of elves got sick from some bad eggnog, and toy production was way behind. Then Santa’s mother-in-law showed up for Christmas, with a lot of “free advice,” and Santa felt his stress levels rising.

On top of that, a couple of the reindeer had wandered off into the tundra, and three more had somehow got themselves pregnant.

Then during his pre-Christmas flight safety check, Santa found the maintenance team had totally neglected the sleigh: the runners were rusty, the paint had cracked, and some of the wood was infested with termites.

Frustrated beyond belief, Santa went into the house for a hot cider. But the elves had raided the cellar and it was dry as a bone. “No wonder they’re all sick,” he muttered.

He reached for a cookie and accidentally knocked over a king-size candle which splattered giant sparks all over his coat and beard. He managed to extinguish the sparks but his red coat was charred and his beard smelled horrible.

Then, at that very moment, somebody rang the doorbell, and kept right on ringing. Reeking of smoke, and definitely not in his happy place, Santa jerked open the front door and there stood an angel with a Christmas tree.

The angel said, “Santa, we got you a beautiful tree this year. Where do you want me to put it?”

And that, as it happens, is how the angel got to be sitting on top of the Christmas tree.

This is not widely known.

A young boy said to his little sister, “Santa works hard all year long making toys. You have to be good or he won’t bring you any for Christmas.”

The sister replied, “How can he be working hard when he’s always just hanging around the mall?”

Full of cheer yet? Here's some more:

Or go back from "Santa Jokes" to "Anniversary Jokes"