Fasten your sleigh-belt! Hold onto your reindeer!
Here’s the best Christmas jokes we unwrapped this year.
They’re shiny and sparkly, they’re new and they’re funny.
Even better than that - they won’t cost you money! 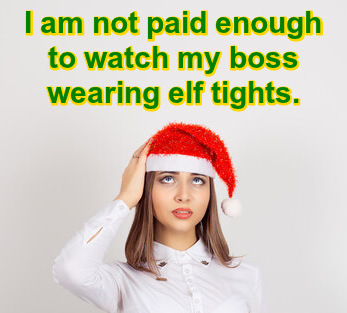 Room At The Inn

The Sunday school kids had been rehearsing their Christmas play for weeks. Finally they were ready for the big Christmas Eve show.

The church was filled, and the play was going perfectly, right up to the scene where the innkeeper tells Joseph and Mary there is no room.

Mary turned to Joseph and said, “I TOLD you to make reservations!”

Two aliens in a UFO are zooming through earth’s atmosphere. Suddenly they’re surprised by a flying sleigh carrying a large human in a red suit. The sleigh is moving at near hyper-speed. It’s powered by eight hoofed animals with large antennae coming out of their heads.

One alien exclaims to the other, “No way we can invade this planet. Their technology’s too advanced.”

A nice meal for the family.
Everybody sharing the dinner duties.
A family trip to church for the Evening service.
Excited kids opening one present at midnight.
Stockings hung by the chimney with care.
Decorations glowing indoors and out.
Snow softly falling all night...

And me on a beach in the Bahamas with a Corona.

A boy and his mom waited in line at the mall to see Santa. When the boy finally got on Santa’s lap, he had a long list of stuff he wanted.

Santa raised his eyebrows and said, “That’s a very long list you have there, young man. I’ll have to check my records and see if you’ve been a good boy.”

The boy replied, “Oh no. No need to bother with that. I’ll just take the skateboard.”

Moved all my garden gnomes from the backyard to the front, and now they're elves.
- Just Bill ‏@WilliamAder

Scientists are saying this winter solstice will be the longest night in the history of earth, but they've clearly never spent a holiday with my family.
- Ashley ‏@ashleycrem

The first half hour of Christmas with my family is just my father telling everyone where to park.
- Thrill Tweeter ‏@Thrill_Tweeter

I wonder how many divorce papers have been filed by wives whose husbands took them seriously when they said, "No presents this year, honey.”
- Emily ‏@EmInPortland

Holiday anxiety is the most festive of all the anxieties.
- Tartlandia ‏@SardonicTart

If I die tonight I want everyone to know that it was my 7 year old's idea to put Christmas lights on the roof.
- Brian Hope ‏@Brianhopecomedy 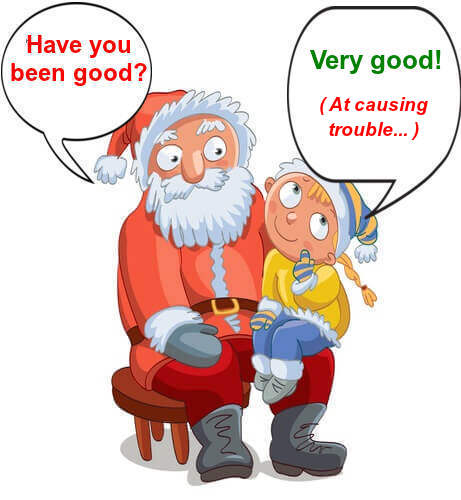 The person who first threw a gift in a pretty shopping bag and threw some crumpled tissue paper on top should have gotten a Nobel prize.
- Just Bill ‏@WilliamAder

My wife set a limit on how much we can spend on each other for Christmas. It’s $100 on me and $500 on her.
- Kent Graham ‏@KentWGraham

Present Buying Tip For Men: She'll love any gift from you, unless it's the wrong size, she thinks it's ugly, or just hates it for no reason.
- Cyber Meh-Day ‏@TheAlexNevil

That kid who wants a hippopotamus for Christmas? She makes a good argument. Let's hear her out.
- Annie Hatfield ‏@HatfieldAnne

I bought my brother some gift wrap for Christmas. I took it to the gift wrap department and told them to wrap it, but in a different print so he would know when to stop unwrapping.
- Steven Wright

Spending money you don’t have to give people you don’t like stuff they don’t want? That’s gotta stop.
- Bill Maher

...and then I said "I would like a robot maid with a vacuum who does laundry and windows.”
And he said "Please get off my lap, my legs are numb."
- DMAC15310 ‏@mixedNUTgallery

Me: I can't get this star on top of the Christmas tree with no a ladder without dumping it over and ruining it.
Whiskey: Yes you can.
- Tony ‏@Tmoney68

Someone hugged me at the office Christmas party and now they know my safe word.
- Just Bill ‏@WilliamAder

I make all my yuletides gay after they date me.
- Maggie Mull ‏@IAmMaggieMull

As I enter the office holiday party with homely Uncle Lou who perspires a lot, I realize I misunderstood what they meant by ugly sweater.
- Kent Graham ‏@KentWGraham

If they were really that wise they would have brought gold, frankincense, and bitcoin.
- Simon Holland @simoncholland

Wife: Honey, I am blessed with a Christmas gift for you. It will be ready in 9 months...
Me: Is it the Lego death star I wanted?
- Adam of Earth @AdamOfEarth

It would appear I have once again donned my gay apparel too early.
- Just Bill @WilliamAder 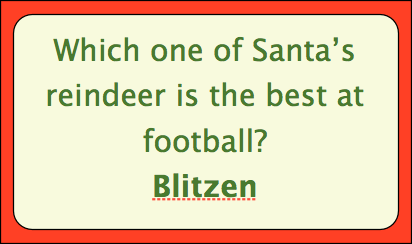 Or go back from "Best Christmas Jokes" to "Anniversary Jokes"