Famous April Fool pranks that made hilarious history. Classic humor from governments, corporations, and plain old brilliant people like you. Read on! 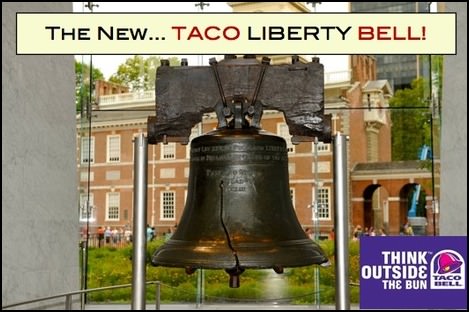 In 1996, Taco Bell announced they had bought the naming rights to the Liberty Bell.

Henceforth it would be known as The Taco Liberty Bell.

2. Even The White House

Also in 1996, the White House announced they had sold the naming rights to the Lincoln Memorial. From now on it would be known as the Ford Lincoln Mercury Memorial.

In 1976, the BBC aired an interview with an astronomer. He told listeners that at precisely 9:47 AM the planets Jupiter and Pluto would be in a rare alignment that would briefly diminish the earth’s gravity.

He further said that if you leapt into the air at that exact moment, you would experience a fantastic floating sensation.

Hundreds of people called in to say they felt it.

In 1975 Australian television announced the country would be converting to metric time. There would now be 100 seconds to a minute, 100 minutes to an hour, and 20 days in a month.

The town Hall was shown with a 10-hour metric clock face. The deputy premiere played along with the prank and extolled the virtues of the new system.

In 1915 a French World War I pilot flew over the German lines and dropped what appeared to be a huge bomb. The German soldiers scattered, but nothing exploded.

When they cautiously approached the bomb, what they found was a football.

Attached to it was a note that said, “April Fool!”

Here's a great one. Stodgy old BBC informed their viewers of some good news.

Great weather and low numbers of the dreaded "spaghetti weevil" meant farmers in Switzerland were harvesting one of their best spaghetti crops ever.

The BBC even manufactured some film footage of Swiss farm workers pulling spaghetti noodles from trees.

They got huge numbers of callers wanting to know how they could grow their own.

BBC told them to plant a piece of spaghetti in a bowl of tomato sauce and see what happened.

NPR (National Public Radio) fooled millions of listeners in 1992 by reporting that Richard Nixon was once again running for President of the United States.

Impressionist Rich Little imitated Nixon reciting his campaign slogan: "I didn't do anything wrong and I won't do it again."

Legions of listeners were outraged.

Alabama state officials received hundreds of protest calls in 1998. A report had emerged that the state was officially rounding off the actual value of Pi (3.14159) to "the Biblical value of 3."

The culprits? New Mexicans for Science and Reason. They cleverly satirized the state's attempts to downplay teaching evolution in schools in favor of creationism.

Also in 1998, the brilliant folks at Burger King came up with the idea of the "Left-handed Whopper."

The 30+ million left-handed people in the U.S. would now be able to buy a whopper with all ingredients rotated 180 degrees just for them.

A full page ad in USA Today resulted in stores being inundated with customers ordering the new burger.

According to Burger King, thousands of customers ordered the "right-handed" version too.

Fortunately for them, it was only their local prankster Porky Bickam.

Porky had collected hundreds of old tires, stashed them in the crater, and set them on fire for this April Fools Day prank.

In 1996, Virgin Cola announced a new innovation: customers would now be able to tell instantly when their soda was too old to drink.

How? Their soda cans would turn a bright blue after the 'sell-by' date.

This was just after Pepsi had changed the color of their cans to a bright blue.

The stations told listeners that the iceberg would be cut up into small pieces, and sold for ten cents. This pure Antarctic ice, they said, would make any drink taste noticeably better.

Also, it would be marketed under the name 'Dicksicles."

Hoards of people lined the harbor to see it and buy some ice.

The prank was blown when it began raining. Being made of shave cream and firefighting foam, the iceberg melted in minutes. 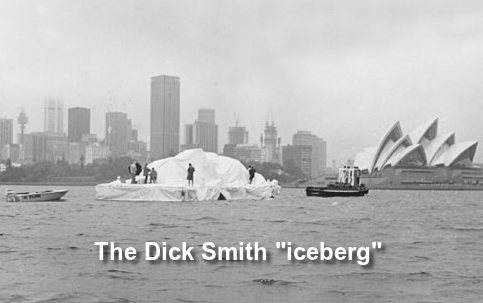 Or go back from "Famous April Fools Pranks" to "Anniversary Jokes"

Or go back to "Really Funny Stuff"