My favorite Halloween Joke List. If you think costumes are comical, check these out. Very funny jokes that’ll give you chills, thrills, and even spills if you're consuming a beverage. 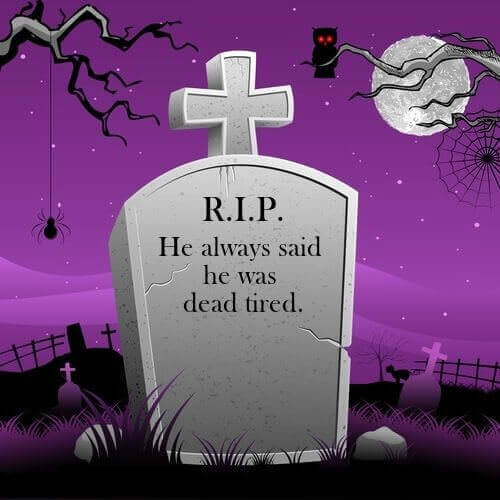 Two guys were walking home on Halloween. It was a dark night, very late, windy and creepy. Just for kicks they challenged themselves to a detour through the cemetery.

They walked along in the dark shadows, weaving in and out of old gravestones and dead flowers. Suddenly they heard a faint tapping sound somewhere ahead of them.

The closer they got, the louder the tapping. Soon the tapping sounded like it was just on the other side of a huge, dead, scary-looking oak tree.

Nervously, they crept forward, close together. Just past the tree they saw an old man kneeling on a lonely grave, chiseling away at a headstone.

“My God,” said one of the guys to the old man. “You scared us half to death! What the hell are you doing out here all by yourself in the middle of the night?”

The old man whispered, “Fixing my gravestone. Those idiots spelled my name wrong.”

At the stroke of midnight one Halloween, three thirsty vampires walked into a bar.

"What’ll it be, boys?" asked the bartender.

"Give me a pint of blood," said the first vampire.

"Give me a pint of blood also," replied the second.

The third vampire paused, then said, "Give me a pint of plasma.”

"OK," said the bartender. "Two bloods and a blood light."

Alex Trebek: “The answer is ‘half of a bottle of wine.’”

Contestant: “What is the amount of wine per child needed to carve pumpkins?”

How To Ruin Halloween! 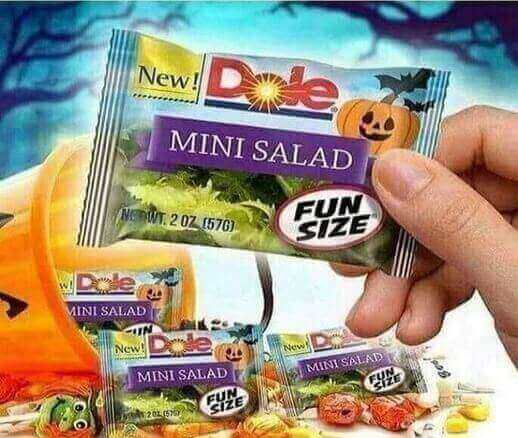 A cab driver is cruising along and sees a nun signaling for a ride. He stops, she climbs in, and off they go. During the ride, the nun can’t help noticing the driver keeps staring at her in the mirror.

Finally she says, “My son, you keep looking at me. Is there something wrong?”

But he continues to glance at her in the mirror, and finally he says, “Sister, I didn’t tell the truth because I was embarrassed. The truth is I’ve always had this dream, this fantasy about kissing a nun. I know it’s crazy, but you’re so lovely I just had to tell you.”

The nun says, “I see.” She thinks a minute and says, “My son, I just prayed about this, and I feel I am supposed to help you. I will let you fulfill your fantasy, but on two conditions.”

She says, “I will let you kiss me once, but only if you are single and Catholic.”

He says, “Sister, I am very much single, and was raised a Catholic. I attend St. Patricks.”

“All right, then,” she replies. “Maybe you should find a place to stop the car.”

He pulls into an alley, stops, gets out, climbs in the back seat. Once there, he kisses her lightly, which turns into a longer kiss, which then turns into a very passionate kiss. But finally the nun pushes him away. He gets back in the front seat and they resume driving.

After a few minutes, he says, “Sister, I feel horrible. I lied. I’m not only married, I’m agnostic.”

A wife decided to play a Halloween prank on her husband. Shortly before they were to leave for a fancy costume party, she told him she had a splitting headache. She insisted he go to the party without her, and after some convincing, he did.

After he left, she waited an hour, then put on a very sexy costume he didn’t know about. She went to the party, thinking it would be fun to watch her husband when he didn’t know she was around.

When she got there she spotted him right away. He was dancing up a storm with all the women, pulling them close, copping little feels and kisses, and generally having a great time being “single.”

When a slow song came on, she approached him and seductively suggested they dance. He accepted immediately, and they started snaking around the room, his hands all over her. When the dance ended, she whispered they should go upstairs, and he agreed in an instant.

They found a room for some hot and heavy fantasy fun. She insisted they keep their masks and most of their costumes on. Afterward, she slipped away, drove home, and got into bed.

An hour later her husband came home, walked into the bedroom and asked how she was. She told him she was much better, and asked if anything unusual happened at the party.

“Not really,” he said, “You know I never have any fun when you’re not there. In fact, when I got there I ran into a couple of old buddies and we ended up in the basement watching football all night. But you won’t believe what happened to the guy I lent my costume to.”

On Halloween day, a man was in the hospital for some colon tests, which wreaked havoc on his digestion and elimination. All morning long he’d been jumping out of his hospital bed and rushing to the bathroom, which all turned out to be false alarms.

So the next time he had to go, he ignored it. Unfortunately, this one time turned out to be the real thing, and with so much pent-up accumulation and pressure, the resulting diarrhea mess was enormous.

Totally embarrassed, he grabbed all the sheets off the bed, being careful not to spill any of his effluvia. He wadded them up and threw them out the window.

It just so happened that a man was standing underneath his window. The wad of soiled sheets spread out as they fell, and landed on him.

Totally freaked out, he started flailing away with both arms and legs, trying to unravel himself from the tangle of sheets and excrement. Finally, after a fierce battle, he managed to get the sheets off him.

Just then a cop was passing, and asked, “What the hell just happened here?”

The man said, “I think I just beat the crap out of a ghost.”

A London lady decides to tour a large, creepy old Scottish castle. She wanders the dark passages and ancient rooms for almost three hours, In the last room of the tour the docent asks her if she enjoyed it.  The Londoner admits that she's afraid of ghosts, and was a bit nervous about seeing one on her tour.

"Aye, but nae worries Lassie," says the Scottish docent.  "I've nae seen a ghost in all the time I've been here."