Really Funny Stuff:
Jokes About Everything

Really Funny Stuff:
Jokes About Everything

Really funny stuff to calm your gruff and smooth your rough. Practical Joke Ideas, Funny Lists, Random Funny Stuff, and Favorite Jokes of the Day. Hilarious stuff to help you vibrate at the frequency of fun. 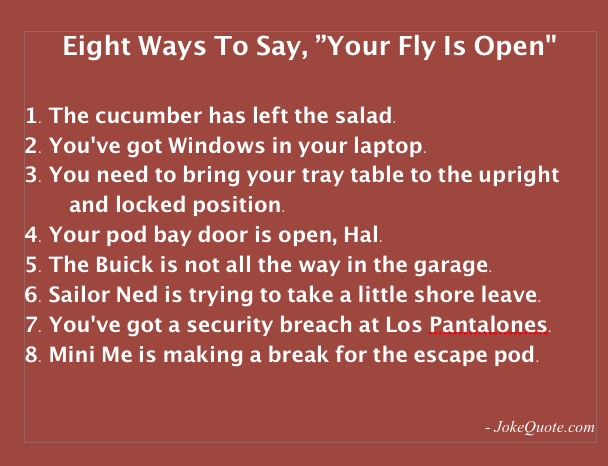 Favorite Jokes of the Day:
"The Worrier"

Henry always worried about everything all his life. But one day his coworkers noticed Henry seemed like a changed man.

They remarked that he didn’t seem to be the least bit worried about anything. Henry said he’d hired a professional worrier and no longer had any problems.

“A professional worrier?" they said. "What does that cost?”

"Two grand a week! How on earth are you going to pay him?"

Once in college I had one shot left on a roll of film. So I stuck the camera in the bathroom while my roommate was taking a bath.

The resulting shot was perfect, like it was posed. There was Kenny, big grin on his face, sitting in the tub. As hard as you looked at the photo, you could not tell if his family jewels were actually exposed or not.

I never showed this photo to Kenny, and kept it secret until December. Then I had some of those cheesy Christmas photo postcards made. (See below.)

I sent them to everybody he knew, including friends in his medical school class, and parents of his best hometown friend.

Kenny heard from a lot of people around the country that Christmas, friends he wasn't expecting to hear from.

They were calling, writing, thanking him for revealing so much of his true nature and giving so generously of himself.

We still laugh about it.
- Greg Tamblyn 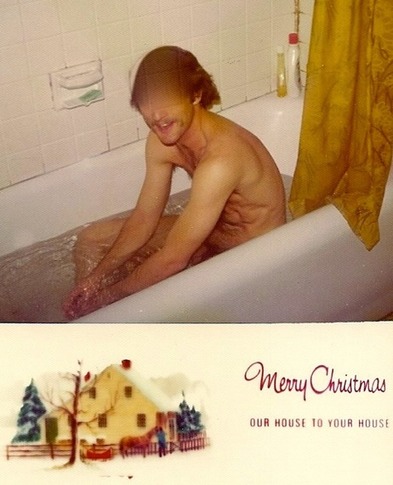 Put a sign on the back of your car that says “How Am I Driving?”
Underneath that put your ex-wife's or ex-husband’s phone number.
Then drive like an idiot.

A young devout Christian named David joined a monastery, worked hard, and eventually was allowed to take his vows.

He promised to be free of the desire for possessions, to be obedient, and most importantly, celibate. He was initiated into the holy order and became one of the brother monks.

He was put to work copying ancient holy manuscripts which he did for a number of years.

After some time, having been religiously obedient and celibate, he was elevated to the post of fact checker. He was entrusted with reading the original manuscripts and making sure they had always been copied letter for letter, word for word.

One day the rest of the monks were having lunch, and they noticed David was missing. The head abbot went down to the archives to find brother David, and discovered him bent over an original ancient text, sobbing and weeping.

Alarmed, the abbot asked, “Brother David, what is the matter?”

“David, all this time...what?” the abbot insisted.

“All this time...we’ve been copying it wrong. The word is ‘celebrate.’”

A young man named Sabu was walking to his village when he came across the local faith healer. As was his custom, the faith healer asked Sabu how his family was doing.

“Everyone is well, “said Sabu,” except my grandfather who is quite ill.”

A few days pass and Sabu once again meets the village faith healer on his way into the village.

“Sabu,” says the faith healer. “How is your grandfather now?”

“Well,” said Sabu, “You know grandfather. Now he believes he is dead.”