These Funny Irish sayings will take you right back to the Old Sod, if you're not there already. Help yourself to a whole heap of Hibernian Humor!

The Irish love words, and use as many of them in a sentence as possible.
- Anne McCaffrey

The reason God allowed whiskey to be invented is so the Irish wouldn’t rule the world.
- Anonymous

I showed my appreciation of my native land in the usual Irish way by getting out of it as soon as I possibly could.
- George Bernard Shaw

An Irishman can argue either side of a question, often at the same time.
- Jim Murray

The Irish have to be the most passionate people in the world. Nobody else would stand in line to kiss a rock.
- Unknown Author

The reason the Irish fight among themselves is because they can’t find any other worthy opponents.
- Unknown Author

What do you call an Irishman who runs at a wall, bounces off the wall, runs at the opposite wall and bounces off, then runs back to the original wall?
- Rick O’Shea.

The ambition of the Irish is to say a thing as everybody says it, only louder.
- Gerard Manley Hopkins

If it was raining soup, the Irish would go out with forks.
- Brendan Behan

May the road rise up to meet you, and may you never sleep under the Riverdance rehearsal hall.
- Greg Tamblyn

May the wind at your back not be the result of the corned beef and cabbage you had for lunch.
- Maxine

May you be in heaven a half-hour before the devil knows you're dead.
- An Irish toast

A person born Irish bears somewhat of a curse,
But not to be Irish is a fate even worse.
- Mercedes McCambridge

Ireland is a country in which the probable never happens and the impossible always does.
- J.P. Mahaffey

My one claim to originality among Irishmen is that I have never made a speech.
- George Moore

Half the world is Irish and the other half wants to be.
- Bill Clinton

Dance an Irish jig to a lively Irish fiddle.
Drink an Irish stout, then have an Irish piddle.

Where does an Irish family go on vacation?
A different pub. 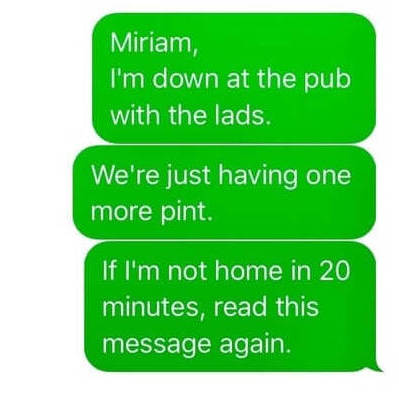 Lawrence Patrick was arrested for being passed out in a pumpkin patch. When the officer pointed out that he was curled up with a pumpkin in a kissing position, he replied, “Begorrah! Is it midnight already?”


O’Boyle flipped open his morning newspaper and was astonished to find his name in the obituaries. Immediately he phoned his friend Kelly.
“Kelly!” he said. “Have you read the paper? They’re sayin’ I died!”
“I did read that, O'Boyle!” said Kelly. “So where are ye calling from?”


Strolling into the pub, Alloysius announced to the bartender, “Pour me a double, Mickey. I’ve just had a huge fight with me wife.”
“Again?” said Mickey. “So how did it end up this time?”
Alloysius took a long sip and said, “When it was finished, she crawled over on her hands and knees.”
“Now that’s different, for sure.” said Mickey. “And what did she have to say?”
“Get out from under that bed, you weasel.”

The Irish have solved their fuel problems. They’ve imported 50 million tons of sand from the Arabs and are going to drill for their own oil.