Leave your own funny stuff in the Comments box. 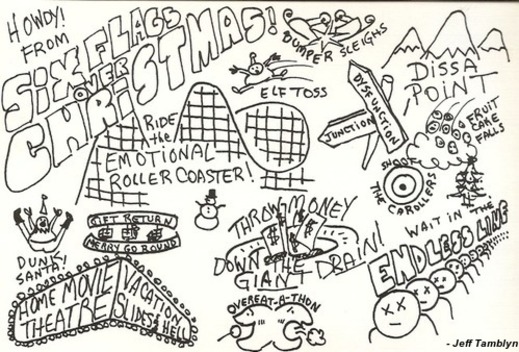 Christmas at my house is always at least six or seven times more pleasant than anywhere else. We start drinking early. And while everyone else is seeing only one Santa Claus, we’ll be seeing six or seven.
- WC Fields

People who complain that my Christmas gifts are "stupid" and "thoughtless" clearly have no idea how hard it is to wrap a pineapple.
- Kelkulus ‏@kelkulus

The similarities are striking:

Jesus was part of a trinity.
Elvis’ first band was a trio.

Jesus was a carpenter.
Elvis majored in wood shop.

Jesus lived in a state of grace in a near-eastern land.
Elvis lived in Graceland in a nearly eastern state.

Jesus came back from the dead.
Elvis had the famous 1968 comeback special.

“Jesus’ countenance was like lightning, and his raiment white as snow.” (Matthew 28:3)
Elvis’ trademarks were a lightning bolt and a snow white jumpsuit.

Jesus’ father is everywhere.
Elvis’ father, Vernon, was a drifter and moved around a lot.

Jesus made rocks roll away from his tomb.
Elvis sang rock ‘n roll.

As I approach my 30s, more and more of my Christmas list is just stuff I need from the grocery store.
- Mike Vanatta

I love getting into the Holiday spirit. Usually a quart of strong eggnog will do it.
- Greg Tamblyn

He's making a list, and checking it twice, and then like five more times 'cause he's got crazy OCD.
- Seth MacFarlane ‏

I was told there'd be cake. I wasn't told it would be fruitcake.
- Just Bill ‏@WilliamAder

My sister-in-law insists we all wear holiday pajamas at Christmas Day dinner and I’m keeping the tags on them just in case she gets hit by a bus.
- Olive Gravy @offbeatoliv

Due to ever-increasing household holiday expenditures in December, it has been agreed by Father O’Casey and Rabbi Goldberg that Hanukkah and Christmas will merge, effective as soon as their lawyers work it out.

Replacing the 8 days of the Jewish holiday and the 12 days of the Christian one will be 10 days of Christukkah, alternatively known as Hanukmas.

Downsizing is expected, with elves, maids-a-milking, partridges in pear trees, and 3 to 4 reindeer being shifted to related, lesser holidays, mostly in South America.

Santa Claus remains, but his red tasseled hat will be replaced by a yarmulke, the skullcap worn by Jewish men, and Christmas angels will now be holding menorahs above their heads.

The Hebrew writing on the dreidel will be changed to Latin, which nobody understands anyway, and translated as “Miracles Happen - Pray Today!”

Jewish children will now be encouraged to write letters to Santa, as he will be including them on his rounds. These will now take place over several nights due to the added workload. Kids who have been well behaved can expect to receive their gifts several days before the troublemakers.

And until further notice, the official Christmukkah Hanukmas song is:
“Oy Come All Ye Faithful.”

A man with a sore throat went to see his doctor. The doctor prodded and poked and finally said, “Your throat’s a bit swollen. Have you eaten anything unusual lately?”

The man said, “Well I know this sounds weird, but last night I ate all my Christmas decorations.”

A mother was Christmas shopping at the mall with her three toddlers in tow. All day long they had been pestering her to buy everything in the store.

They’d been running around like maniacs, touching everything, even knocking over displays. Then they wanted to go see Santa again.

Finally she was at her wits end. She crammed herself, all her shopping bags, and the toddlers into a crowded elevator.

As the doors closed she said out loud, “Whoever started this whole Christmas thing should be strung up.”

From somewhere behind her she heard, “I do believe they already crucified him.” 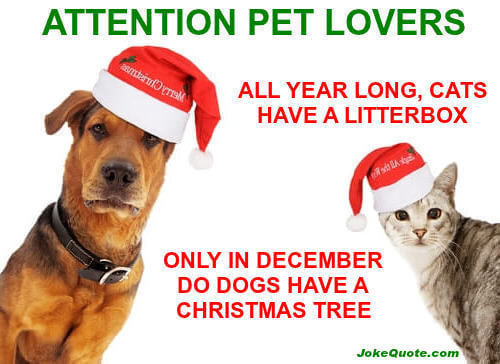 The Twelve Days of Christmas is kind of like the Christmas version of 100 bottles of beer on the wall.
- Ashley ‏@ashleycrem

I noticed a lot of stores are already putting up Xmas decorations and I haven't even got around to taking down my 'Shark Week' decorations.
- zbinski ‏@zbinski

If the NSA needs to listen to all our communications in order to locate the people actually making the fruitcakes, I'm okay with that.
- Just Bill ‏@WilliamAder

I note a certain irony as we celebrate the birth of Christ and I take his name in vain 67 times putting up Christmas lights.
- Kent Graham @KentWGraham

Had enough Christmas stuff? Or want more like this? Go here:

Or go back from "Funny Christmas Jokes" to "Anniversary Jokes"

Or back to the Home Page: to "Funny Jokes, Funny Quotes, Funny Sayings"