Irish jokes for funny folks
Who dig the Emerald Isle
Laugh and sing your cares away
Trade troubles for a smile.

Darby was driving his old truck in a bit of a panic. He needed to make a deposit before the bank closed, and he couldn’t find any place to park.

He looked up to the heavens and said, “Lord, please help me find a spot to park me truck. I promise I’ll go to mass twice a week and spend more time with me wife and daughters.”

Like a miracle, a parking space opened up right in front of him.

A teenage boy enters the confessional and asks for forgiveness for his sins. He confesses to having been a bit too intimate with a girl.

"Is that you, Johnny Callahan?” asks the priest.

“I’ll need to know who it was you’ve lain with, Johnny.”

“Well Johnny,” says the priest, “you know I’ll hear about it eventually. Was it Mary McMonigal?”

“Was it Lizzie Kelly?”

“Was it Shannon O’Brien, then?”

“Was it young Christie McGuire?”

“I must remain silent, Father.”

“Ah, Johnny, you’re  a rock, you are. I understand your position. But you must do penance for your sins. You’ll not be permitted to attend mass for two months. Now go say five Hail Marys and think about what you’ve done."

Johnny leaves the confessional and goes outside where his friend Michael is waiting.

Johnny replies, “I got two months off and four good leads.”

O’Toole stunned the priest one Sunday by showing up at mass for the first time in living memory. Afterward, the priest asked O’Toole what had made him finally come to mass.

O’Toole looked the priest in the eye and said, “Father, I cannot lie to you. I lost me good hat, and I know old Dunne has a hat just like it. I thought I’d leave mass early, and just take along old Dunne’s hat from the hat rack, sort of 'by mistake,' if you know what I mean.”

“But I see you’re still hatless,” said the priest. “What changed your mind, O’Toole?”

“Your sermon on the ten commandments, Father,” O’Toole replied.

“Ah,” said the priest. “So when you heard the commandment 'Thou shalt not steal,' you decided not to take Dunne’s hat for yourself.”

“Not exactly, Father,” said O’Toole. “When you mentioned the one about not committing adultery, I remembered where I left me own hat.”

An elderly Dubliner named O’Brien is near the end. He looks up from his hospital bed and says, “Son, I don’t have long now. Please go bring me a Protestant minister.”

His son is perplexed. “Dad, you’re a good Catholic. Surely it’s Father Murphy you want me to fetch.”

“No son. I mean it. Get me a Protestant minister. And hurry. I’m near the end now.”

“But Dad, we don’t even know any Protestant ministers. Please let me bring you the priest.”

“No son. Don’t refuse your dad’s dying request. A protestant minister, and right away.”

So the son brings a Protestant minister, who converts the old man and then prays with him. After an hour, the son escorts him out.

Soon afterward, in rushes Father Murphy. The son relates what just happened, and the priest can’t believe it. He’s stunned. He goes to the old man’s bedside and asks, “Why have ye done this, O’Brien? Ye’ve always been a good Catholic. I christened all your babies. Why convert now?”

“Well Father,” whispers O’Brien, “I figured if somebody had to go, better one of them than one of us.”

Saddam Hussein was hanging out in his palace deciding who to invade next, when his phone started ringing.

“Saddam?” said the voice on the other end. “This is Murphy from Cork callin’. It’s a courtesy call to inform you that we’ve declared official war on you.”

Saddam thought for a second, then said, “Murphy, thank you for this news. I’m curious - can you tell me the size of your army?”

There was silence on the line. Saddam said, “Murphy?”

Murphy replied, “Hold on, I’m countin’ it now. It looks like between me, me brother John, his brother-in-law Kelly and the fire brigade, we have eleven.”

That afternoon the phone rang again. “Alright, then, Saddam," said Murphy, "the war is still full speed ahead. We’ve managed to obtain some machinery.”

“Machinery?” said Hussein. “And what exactly are we talking about, Murphy?”

“Well, at last count, we’ve acquired two backhoes, a harvester, and a new diesel tractor Paddy says we can use.”

“I have to let you know, Murphy,” Saddam sighed, "we have eleven thousand personnel carriers and twice that many tanks. We’ve also drafted another 200,000 men into the army since this morning.”

Like clockwork, Murphy called again the next morning. “Alright then, Saddam, the war is still full speed ahead. We’ve managed to acquire an airborne division and we’ve increased our numbers. We’ve mounted two shotguns on Tommy’s Cessna, and the full bowling team has enlisted.”

Once more Saddam sighed and said, “Murphy, I have 5,000 Russian fighter jets, and we drafted another 200,000 men this morning, for a total of one million.”

Later that evening Saddam’s phone rang again. “Saddam, it’s sad I am to inform you we’ve had to postpone the war indefinitely.”

“This is shocking news, Murphy,” Saddam replied. “And why is that, exactly?”

Murphy said, “Well, we checked with all the wives, and they said there’s no way in heaven they’ll cook for a million prisoners.” 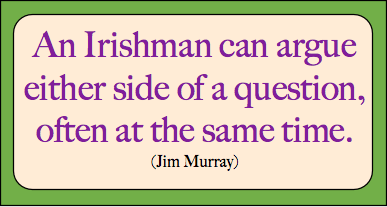 Or go back from "Irish Joke Collection" to "Really Funny Jokes"