Hilarious pranks for harmless laughs. Great practical joke ideas for the office, dates, spouses, weddings, and more. Get yourself some laughs with these funny joke ideas.

Last year, the man I was dating had just bought a new car.

We were going out to dinner on April 1st, so I snuck out to his car beforehand and put a note under the driver side windshield wiper. It said “Sorry about the dent on the passenger side, but I have no insurance and no money to pay for it.”

Then I left another note on the passenger side saying, “Enjoy your April Fool’s Day.”

He was quite upset after the first note, but relieved after the second note, and we laughed about it.

I heard some threats of revenge/retaliation for some time after that!
- Jan Foss

Many years ago a girlfriend of mine was getting married. The soon-to-be groom was quite the prankster, and my girlfriend wanted to give him a dose of his own medicine.

She enlisted me to show up at the wedding reception as a pregnant bride. Which, of course, I am silly enough to do.

So at the reception, when the bride and groom are about to cut the cake, I rush in from the back of the reception hall, making a scene, and calling attention to my obviously pregnant belly.

I act totally indignant, shouting that the groom had left me at another church waiting, and all the while he was HERE getting married to someone else.

I even had the chance to talk to the groom’s father beforehand to get some delightful tidbits to drop. Like the fact that he had “supposedly” gone on a guys’ fishing trip seven months earlier. Oh, sure!

I have to say, we got him good! He was shocked, and the rest of the guests were apoplectic! Then the bride confessed to putting me up to it and everybody had a good laugh. Somewhere there is a picture of me and the groom on the dance floor, fat belly and all.
- Chris Mitchell

I live in a senior community. Every afternoon the usual crowd gathers for Bingo. I thought how funny it would be to fill their ink blotters with disappearing ink, and see their reactions as each person notice their ink blotted numbers start to disappear.
- David Kulikowski Las Vegas, Nevada

Here's one I'm a little ashamed of. This is something I would never do today in my kinder wiser dotage, but I was young and not as tuned in.

One of the gals in the office was afraid of mice. I didn't know how afraid. One day before she came in, I put a toy mouse in her typewriter, positioned so that when she started typing, the keys would bounce the mouse up.

I was in my office when I heard a harrowing scream. Everyone ran into the central area and the subject was plastered against the wall and shaking. I felt bad and the rest of the office was not happy with me. I was properly chastised.

A few days later, when the inner office mail came through, I was sorting it and found one addressed to me.

It seemed way too light to have anything in it, so I shook it and held it up to the light…….where I beheld a large black spider, a LIVE one! I AM terrified of spiders. If I'd opened it, I may have had a heart attack.

They got me back!
- Sally Miller

Ardelle is a fellow nurse I work with. She and I were always taking verbal jabs at each other, and one day she really got me good. I told her God was going to get her for that.

Ardelle could bake and decorate beautiful cakes, but she didn’t know I could, too. So, after about a month, I went home from work one day and put a cake in the oven.

I baked it at about 500 degrees for several hours, until it was black and hard as a rock. Then I frosted and decorated it beautifully. I wrote on it, “To Ardelle From God.”

I got to work early and displayed it prominently in the employee lunch room. No one saw me.

All morning everyone was asking who brought in the lovely cake, and they couldn’t wait until break time when Ardelle would cut it.

After she tried to cut into it and practically wrecked the knife, they laughed all afternoon. And yes, by the end of the day, Ardelle figured out who it was really from.
- Ellen

When my husband is out of town I think up ways of punishing him for being away from me. Like, I’ll take all the batteries out of the remote controls.

He comes home and the first thing he does is try to turn on the TV or the stereo and I love to watch when he starts to go crazy wondering why none of them work.

Or I’ll sneak into the bathroom while he’s taking a shower and take all the towels. Then I’ll hide and watch while he walks around the house naked and dripping, looking for a towel.

Hilarious Pranks
Going Down, Cracking Up?

From a list of Things to Say in an Elevator:

Open your bag or briefcase slightly, peer in with concern and ask, "You all right in there?" To increase the hilarity one can add, "Got enough air?"

Hilarious Pranks:
Women's Toy On Its Way To A Bridal Shower 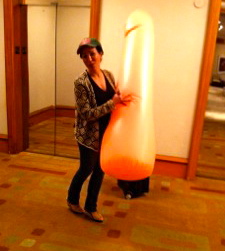 Or go back from "Practical Joke Ideas" to "Really Funny Stuff"