These St Patricks Day jokes will get you in the spirit without the need for spirits. You know you've had a good St Pats when leprechauns, unicorns, rainbows and pots of gold populate your lawn. Shláinte!

Father O’Brien has been toasting St. Patrick to the tune of half a bottle of wine. While driving erratically, he gets stopped by the police.

The officer notices the bottle of wine on the passenger seat and asks, “Father, have you had some wine this evening?”

“Of no, officer,” replies the priest. “Only water.”

“Well then, what about that half-empty bottle of wine on the seat?”

Father O’Brien looks at the wine and says, “Jesus, Mary, and Joseph! He’s done it again!”

You wear green on St. Patrick’s Day so your clothes will match your face after you’ve been drinking awhile.
- Melanie White

The purpose of St. Patty’s Day is to consume enough green beer to see a leprechaun.
- Unknown Author

Excited about St. Patricks day. To my Hollywood friends: Envy does not count as wearing green.
- Albert Brooks ‏@AlbertBrooks

OMG St Patrick's Day is 9 months before Christmas. Maybe Mary and Joseph just drank green beer and forgot some of the stuff they did.
- Kelkulus ‏@kelkulus

Don’t drink too much green beer on St. Patrick’s Day. It’s not nearly as pretty when it comes back up.
- Melanie White

Father Kerrigan walks into a pub in Cork, surveys the room, and says to the first man he meets, "Do you want to go to heaven and meet St. Patrick?"

"I most certainly do, Father."

The priest says, "Then sit over there at that table."

The priest then asks another man, "Do you want to go to heaven and meet St. Patrick?"

"Then sit over there at that table by the other fella," says the priest.

Then Father Kerrigan walks up to O'Brien and says, "O'Brien, do you want to go to heaven and meet St. Patrick?"

Father Kerrigan can't believe it. "You mean to say that when you die you don't want to go be with St. Patrick in heaven?"

O'Brien says, "Oh, when I die. Sure, Father. I thought you were gatherin' a group to go right now." 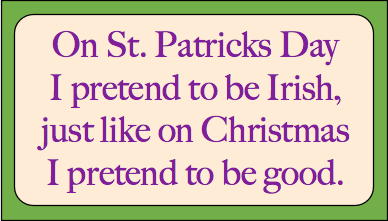 Kelly and his wife have been out till the wee hours celebrating St. Patty’s Day. Despite his wife’s protestations, Kelly decides to drive home.

Predictably, he’s unable to drive in a remotely straight line. His car jerks violently from side to side, until finally he’s stopped by the Garda.

“Kelly,” says the officer, “you’ve obviously had more than a bit too much.”

“Well,” said the officer, “Did you realize you were weaving so violently that half a mile back your wife fell out of the car?” 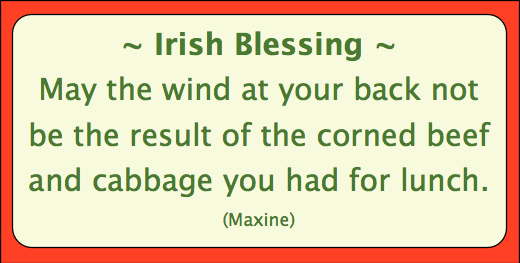 A man from Dublin moves to County Cork. His first night there he patronizes the local pub, and orders three pints at the same time.

The bartender is curious, but doesn’t say anything. He serves the man his three pints. The new customer sits quietly and drinks all three beers.

The next night and the next, the same thing happens. Each night the man orders three pints all at once, and sits quietly drinking. Since nobody knows him, he becomes known to the locals as “The Three Pint Man.”

After a week, the bartender’s curiosity gets the best of him. He asks the man why he always orders three pints at once.

The friendly customer explains, “My two brothers have moved away. One to Canada and one to New Zealand. We all miss each other, so we agreed to always order three pints as a way of remembering each other every day.”

Then the day after St. Patricks Day he comes into the pub as usual, but only orders two pints. The bartender and the locals are shocked. They realize one of the brothers has met with an untimely end, and they respectfully let “Three Pint Man” drink in peace.

After a week, the bartender decides to offer his condolences. “I’m sorry about the loss of your brother,” says the barkeep. “Which one was it? The Canadian or the Kiwi?”

“What?” says Three Pint Man. “Oh no, nobody’s died, nothing like that. My brothers are both fine. It’s just that I overdid it a bit on St. Pats, so I decided to give up drinking for the rest of Lent.”

He removes his shoes to tiptoe inside, but trips on the carpet. He lands on his rear, smashing the two bottles in his back pockets. He manages not to yell, but is in great pain.

He pulls down his pants, turns his head to look in the hallway mirror, and sees cuts and blood all over his backside. So he fetches a box of bandages from the bathroom. He tries his best to cover all the bloody parts that he can see.

He then staggers off to bed.

At sunrise he wakes with a terrible headache, and a prodigious amount of pain in his rear end as well.

His wife says, “I see you celebrated a bit too hard last night after you promised not to.”

“Why, how could you assume such a thing?” asks O’Toole.

She replies, “Well, it could be the front door left wide open. And the shattered glass all over the carpet might be a clue. Or it could be all the blood trailing from the hallway into the bathroom and bedroom. But the biggest clue is the 27 bandages stuck all over the mirror in the hall.”