Squeaky clean Christmas jokes that slide down your chimney with a big bag of laughter. Fill your stockings with all the funny stuff and free clean jokes that'll fit. 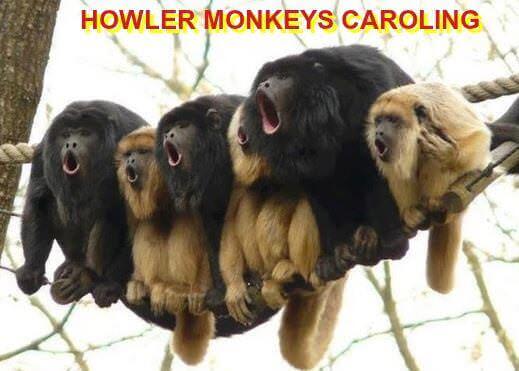 Little Susie had been born with a sunny disposition, and was the most optimistic kid anybody had ever seen.

She loved people and animals, and no matter what happened, she always saw the bright side.

She was also an artistic girl. So one Christmas, her parents got her a big bag of clay for making pottery. They put it on the back porch next to a bag of horse manure for the garden.

On Christmas Eve, dad wrapped the presents. It was a little dark on the porch, and as you may have guessed, he wrapped the manure by mistake, instead of the pottery clay.

On Christmas morning, Susie was so excited to see what Santa had brought her. When she finally got to unwrap her big present, her parents watched with anticipation to see how much she liked her clay.

When Susie opened the package, and then the bag inside containing several pounds of stinky horse manure, the parents were aghast.

But before they could apologize, Susie said, “Oh boy! I got a pony!

One Christmas eve, Pete and Jane were driving their Russian friend Rudolph back to his house. The weather outside was frightful. Jane asked Pete, “Do you think that’s sleet or rain out there?”

“What do you mean, Pete?” asked Jane.

I wanted our street to have the prettiest decorations in the neighborhood, so I strung lit colored balls from house to house, all the way down the block. I did all the electrical wiring myself.

If you’d like further information, just drive down Moorpark Street in North Hollywood. We’re the third pile of ashes from the corner.
- Bob Hope 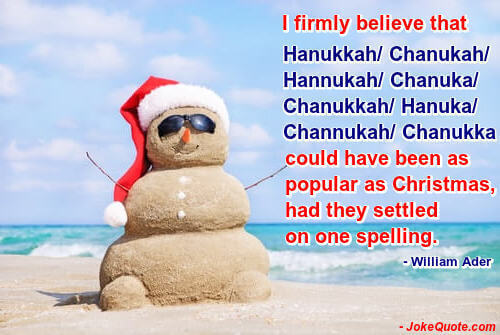 One Christmas, a mother decided she was no longer going to remind her kids to send thank you notes. Consequently, the kids’ grandmother never received any thanks for the Christmas checks she sent to the kids.

The very next Christmas, all the kids stopped by in person to thank their grandmother for their checks.

When asked by a friend what caused this change in behavior, the grandmother replied, “Simple. This year I didn’t sign the checks.”

A father took his son Billy to the Penney's mall to see Santa. They stood in line awhile, and finally the boy was able to meet Santa and sit on his lap.

“What would you like for Christmas, Billy?” asked Santa.

“An X-Box and a Hobbit game,” Billy said.

“Okay, we’ll see what we can do about that,” said Santa with a big smile.

Later on that day they also went to see Santa at the Sears mall. When Santa asked Billy what he wanted for Christmas, Billy said, “An X-Box and a Hobbit game.”

“Will you be a good boy and do what your daddy tells you?” Santa asked.

Billy turned to his dad and said, “Let’s go back to the other Santa, Dad.”

“Why Billy?” asked his father.

“Because I didn’t have to make any deals with that one.”

A guy goes into the post office and asks the clerk for some new holiday stamps.

The clerk behind the counter asks, “Which denomination?”

The guy thinks for a minute, then says, “Give me 5 Jewish, 2 Lutheran, and 7 Catholic.”

When a father asked his little boy what he wanted for Christmas, the boy replied, “A baby sister.”

As it turned out, the wife was pregnant, and delivered on Christmas Eve. On Christmas day she brought home a brand new baby sister for their son.

The next year, when the father asked his little boy what he wanted for Christmas, the boy said, “If it wouldn’t make mommy too uncomfortable, I’d like a pony.”

One Christmas, a mother asked her young daughter if she could name two of Santa’s reindeer.

“Rudolph and Olive?” said the mother, quizzically. “Are you sure?”

“Yes, mommy, Rudolph and Olive. Like in the song.”

The girl sang, “Rudolph the red-nosed reindeer, had a very shiny nose. And if you ever saw it, you would even say it glows. Olive the other reindeer....”

6 year old boy: "I don't want to go to church on Christmas"

Mother: "It's important to go celebrate the birth of Jesus"

Or go back: from "Clean Christmas Jokes" to "Clean Funny Jokes"

Or back to "Anniversary Jokes"