Marriage is evidently for producing two things: kids, and really funny short jokes. (No, they’re not the same thing.) Feast your funnybone on the best short jokes about husbands and wives...then go give your sweetie a tickle. 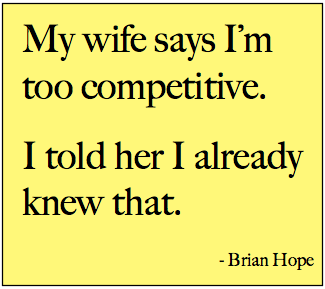 A man is in bed beside his wife of thirty years. Feeling romantic, he says, “I’m about to make you the happiest woman on the planet.”

A man and a woman who were total strangers to each other discovered that they had mistakenly been booked into the same sleeping compartment on a train.

Since there were no other compartments available and they were exhausted, they decided to share the compartment. She took the lower birth, he took the upper, and in a few minutes they were both sleeping.

In the middle of the night the man woke up shivering. He turned over, reached down, and carefully nudged the woman to wake her up.

He said, "I'm really sorry to wake you, but I'm shivering up here. Could you possibly reach behind you in the drawer for a blanket?"

"I have a better plan," she answered. "For just this one night, let's act like we're married."

"Great." she said. "Get your own damn blanket."

After a moment of silence, he farted.

Billy's father picked him up from school. He was anxious to find out about Billy's tryout for the school play.

Billy replied, "Dad, I got a part! I play a man who's been married for twenty years."

"That's great, son," said his dad. "Keep up the good work and before you know it they'll give you a speaking part."

A man walked out of the bathroom naked.

He declared to his wife, “It’s really hot outside, way too hot for clothes. What do you suppose our neighbors would say if I did all the yard work today in my birthday suit?”

She took one look at him and said, “I know exactly what they’d say. That I married you for your money.”

A man and his wife were dancing at his college reunion, and he couldn't stop staring at another lady, quite obviously sloshed to the gills, and swigging her cocktail all by herself near the bar.

The wife noticed and said, “You keep staring at that woman. Is she someone you remember?”

The husband said, “She's an old girlfriend, senior year. I heard she started drinking after we broke up way back when, and the rumor is that she hasn't stopped since.”

“That somebody could keep on celebrating all that time.”

A guy is ready to leave for the party but his wife is taking forever. He looks at his watch and yells to the bedroom, “We’re gonna be late! Are you ready yet?”

She yells back, “Don’t you ever listen? I’ve told you for an hour I’ll be ready in a minute!”

COMMON SIDE EFFECTS INCLUDE

In a dim, smoky room, the psychic turned the cards up one by one, and told her client the shocking truth:

"There is no gentle way to tell you this, so I'll just say it. Prepare for widowhood. Your husband will die horribly and violently before the year is out."

Noticeably disturbed, the client stared at the old mystic, then at the lone, wavering candle, and finally at the cards laid out before her.

She breathed in deeply, trying to control her emotions.

She had to find out the rest. She could not leave without knowing.

She gazed intently at the old woman, prepared herself, and asked,  "Is there any chance I'll be acquitted?"

A man with seven children is a bit too proud of his fertility. He is so proud that he starts referring to his wife as "Mother of Seven," even though it annoys her completely.

One evening at a neighborhood barbecue, the husband is ready to head home but his wife is on the other side of the yard.

So he yells in her direction at full volume, "Are you ready to leave, Mother of Seven?"

His wife, totally put off by this insensitive remark, responds, "Any time is fine with me, Father of Three."