These jokes about men have all been clinically approved by our judiciously jovial panel of fun-loving female humor hunters. If you’re a woman looking for very funny jokes about the Y-chromosome crowd, you might be here awhile. If you’re a man, chill out and have a laugh at your half. Of the species, I mean. 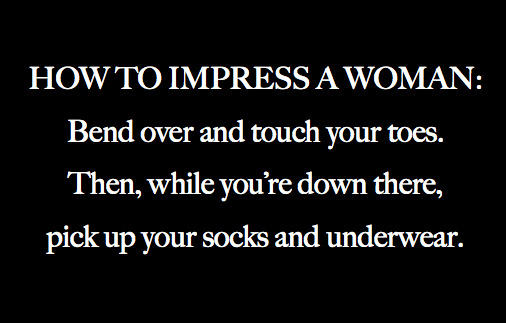 A man said to his wife, “Hey, guess what? This article says that women use twice as many words as men during a single day. I always told you that women talk more than men.”

“There’s a good reason for that,” his wife replied. “Whatever we say to a man we have to repeat at least once.”

The man looked up and said, “What?”

A mother was giving her five-year-old boy a bath. He began examining his pubic area, and asked, “Mom, is this where my brains are?”

She answered, “Not yet, honey."

Jokes About Men:
The Swap

A man walks into the kitchen, grabs his wife from behind, and says in a sexy voice, “Would you like to swap positions tonight, Darlin'?”

“Great idea,” she says. "You wash the dishes while I zone out in the La-Z-Boy and pass gas."

If you love something, let it go.
If it returns to you, it was meant to be yours.
If it never returns, it was not ever yours anyway.

However...
If it just parks itself in your den, eats all your food, leaves a huge mess, borrows your credit cards, takes over your computer and television, and never realizes that you actually let it go to begin with, then you either gave birth to it or married it.

A man decided to wash his own workout clothes. But once in the laundry room, he was at a total loss. He yelled at his girlfriend, “What washing machine setting do I use for this sweatshirt?”

“It all depends,” she answered. “What does it say on the sweatshirt?”

A moment later he shouted, “University of Arkansas Football.”

A man, feeling peevish, remarked to his wife, “I can’t figure out how a woman like you can be so beautiful and so stupid all at once.”

A single woman is searching for the ultimate truth. One day she is told a legend of a perfect master living in a hut, high up in the Himalayas.

She embarks on a pilgrimage up the mountain, which takes weeks. When she finally arrives, all she sees is a disheveled old man in a nasty mood. He’s stomping around, cursing, kicking things, and looks like he’s never smiled in his life.

The woman can’t believe this could be the perfect master, but she asks anyway.

“Are you the perfect master I’ve heard about who lives up here? I’ve come a long way to find out.”

The man shouts at her, “No! Go away! Don’t bother me! There’s nobody here except an old wench over in that hut.”

The woman is certain she’s in the wrong place, but she’s come so far, she decides to at least try the wench.

When she enters the hut, she is suddenly surrounded by peace. The air is light, the hut is beautiful, and the sounds of nature are exquisite. In the center of the room is a beautiful older woman, smiling serenely, and floating in a sitting position a foot off the ground.

“Excuse me,” says the seeker. “I’m looking for the perfect master I was told lives here. Is that you?”

The floating woman smiles and nods. “Yes. And the man you met out there is my husband.”

“But that is so strange. He's so horrible and nasty. How could you be married to him?”

The floating woman replies, “How do you think I got to be a perfect master?”

This morning on my highway commute, the SUV next to me had a woman behind the wheel. She was doing 75 with her face scrunched up next to the mirror putting on makeup.

About five seconds later she came drifting over into my lane, fast, and still oblivious to everything but her eyeliner.

As a guy, I don’t really scare easy, but this freaked me out so bad my cordless shaver flew out of my left hand and smacked the Egg McMuffin out of my right. In the chaos of trying to regain control of the car with my knees, my iPhone dropped off my shoulder straight into the hot coffee between my legs, sloshing it all over so it scalded Big Tex and the Little Posse, destroyed my new phone, stained my pants, and probably cost me the customer I was talking to.

A son’s old and rather feeble father was nearing the end of his life. The son knew he was in line to inherit a fortune, and thought maybe it was time to find a female to enjoy it with.

One night at a party he met a stunning woman who tuned every head in the room. When they had a chance to meet and chat, he let her know he was due to come into several million dollars when his father passed away.

She agreed to go home with him that night, and within 24 hours she became his new stepmother.

Some guys will never learn.

Or go back from "Jokes About Men" to "Priceless Humor: Relationships"