Jokes about women - for men, and women with a sense of humor. Guys and gals will never totally get each other, so we might as well get funny.

Plenty more funny stuff about men & women on other pages - links at the bottom.
Share your own jokes and feedback in the Comment box. 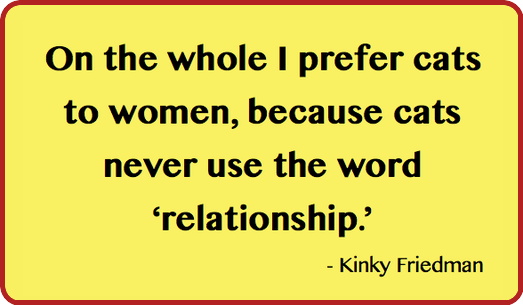 The Five Ingredients Of A Perfect Relationship

Once upon a time, a man asked a woman if she would marry him.
The woman told him no.

And the man lived happily ever after and played a lot of golf and poker.
The end.

Once upon a time, in olden days
There was a woman
Who never nagged,
Whined, or complained.
But it was many years ago,
And it was only that one time.
The End

Joke Of The Century

Two women were sitting together, quietly minding their own business.

A woman is a lot like a telephone.
She likes for a man to hold her, talk to her, and touch her frequently.
But push the wrong button, and click, you’ve been disconnected.

In a bar one night, a girl meets a guy she thinks is a real hunk. They chat for awhile, the sparks fly, and they end up going back to his apartment.

He pours some wine then gives her a little tour, finally ending up in the bedroom where he shows her his enormous collection of stuffed animals.

He’s even got them organized: large stuffed animals on a high shelf all along two walls. Then medium-sized ones just under the big ones, and little ones on two more shelves all along the bottom. They’re all cuddly, lovely and very cute. She’s impressed and decides he must be the sensitive man she’s been looking for all her life.

He puts his arm around her, they start kissing, and eventually spend all night under the sheets. They go at it until the wee hours, until they’re lying together, spent and relaxed.
She turns to him, gives him a squeeze, and asks how it was for him.

The guy says, "You can take any prize from the bottom row."

There was a newly opened “Husband Store” with five floors of potential mates for women. On each higher floor, the men were more expensive, but had even more desirable qualities. The policy of the store, however, was that shoppers could only go up, not back down to a lower floor.

A couple of single gals decided to go check it out. On the first floor they saw a sign that read, “These men are all gainfully employed and are very fond of children.”

That sounded great to the gals, but they got to wondering what might be better. So they went up to the next floor where the listing said, “These men all make a lot of money, are very fond children, and are considered extremely handsome.”

Well, that seemed like everything they wanted right there. But as they talked about it, they couldn’t help wondering what might be up one floor. So even though it meant more money, they went upstairs.

They were greeted with a sign that read, “All the men on this floor are not only very handsome, make a lot of money, and are very fond of children, they’re great at lawn care, house-cleaning, and even decorating.”

The gals thought this had to be the tops. They couldn’t believe there could be another floor above this. But as they chatted about it, they realized they had to find out what kind of man was even more desirable. So up they went.

Once on the fourth floor, they saw a sign that read, “The men on this floor have all the wonderful qualities of the men on the 3rd floor, and also are passionate, sensitive, romantic lovers.”

Now the gals were getting ecstatic, and they knew they whatever awaited them on the fifth floor, they had to have it. So up they went to the highest floor.

When they got there, they found a locked door that said, “Any woman reading this sign will never be satisfied, and is impossible to please. You may exit down the fire escape to the left.”

Of course women and men are different, but I don’t get how a female can pour boiling hot wax on her thighs, pull all the hair out including the roots, and still be scared to death of a bug.

A wife and her husband are in bed, cuddling and getting aroused. Abruptly she says, “Honey, let’s stop. I really don’t feel like making love. What I really want is for you to just hold me.”

Her husband is frustrated and says so. She complains that he is not in synch with her physical and emotional needs as a female.

He’s been through this with her before, so he knows nothing is going down tonight. He rolls over and goes to sleep.

The next day he offers to take her shopping at an expensive ladies’ store. He tells her not to worry about cost, and watches as she tries on some really pricey clothes. She has trouble deciding what she likes better, and he tells her to go ahead and get several outfits. She’s delighted.

They stop in the shoe department and it’s the same thing. Expensive shoes, she can’t decide, and her encourages her to get several pairs. She loves it.

She wants to look at jewelry now, and there are a few gorgeous pieces she fawns over. He tells her to take her pick, and eventually she decides on a beautiful diamond pendant worth about five grand. She’s absolutely thrilled.

She tells him she’s ready to go home, and they should go find the cashier.

Whereupon he tells her he doesn’t feel like buying anything today.

“What?” she says. “What are you talking about?”

“Honey,” he says, “I really just need you to hold this stuff for awhile.”

“You’re kidding!” she says. “You got me all psyched up just to hold this stuff?”

He replies, “You’re just not in sync with my financial needs as a male.”

Or go back from "Jokes About Women" to "Priceless Humor: Relationships"