Funny Marriage Quotes...
Married Or Not

Funny Marriage Quotes... Married Or Not

Funny marriage quotes for folks who have tied the knot....or not. Funny sayings and free clean jokes for a healthy dose of marital mischief and cohabital comic relief

Husbands and wives are irritating. But without them, who would we blame for misplacing our socks?
- Janet Periat

We always hold hands. If I let go, she shops.
- Henny Youngman

I don’t know if my husband dreams in color, but he snores in Dolby.
- Melanie White

I bought my wife a new car. She called and said, "There is water in the carburetor." I said, "Where's the car?" She said, "In the lake."
- Henny Youngman

The best thing to ever happen to marriage is the pause-live-TV button.
- Rick Reilly

I’m going to get married again because I’m more mature now, and I need some kitchen stuff.
- Wendy Liebman

How many husbands have I had? You mean apart from my own?
- Zsa Zsa Gabor

My wife and I tried to breakfast together, but we had to stop or our marriage would have been wrecked.
- Winston Churchill

Marrying a man is like buying something you've been admiring for a long time in a shop window. You may love it when you get it home, but it doesn't always go with everything else in the house.
- Jean Kerr

Whenever you want to marry someone, go have lunch with his ex-wife.
- Shelley Winters

My wife is a psychologist...not only does she know when I’m being a jerk, but she knows exactly what type of jerk I’m being.
- Lee Judge, Kansas City Star

Professional marriage counselors agree that the most productive and mature way to deal with marital anger is to stomp dramatically from the room. You want to make your move before the opponent does, because the first person to stomp from the room receives valuable Argument Points that can be redeemed for exciting merchandise at the Marital Prize Redemption Center.
- Dave Barry

The four most important words in any marriage..."I'll do the dishes."
- Anonymous

You know your Utah marriage is in trouble when all your wives start seeing another polygamist.
- Greg Tamblyn 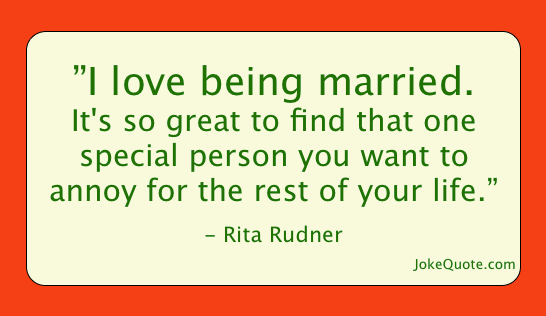 In Hollywood a marriage is a success if it outlasts milk.
- Rita Rudner

When a man brings his wife flowers for no reason, there’s a reason.
- Molly McGee

We would have broken up except for the children. Who were the children? Well, she and I were.
- Mort Sahl

Before we got married, I caught her in my arms. Now I catch her in my pockets.

My smartphone is so smart, it won’t let me call my ex-wife.

You can tell it’s a serious relationship when you begin thinking that your partner might make a good starter-spouse.

Marriage changes passion. Suddenly you're in bed with a relative.

Anybody who claims that marriage is a 50-50 proposition doesn’t know the first thing about women or fractions.

New marriage vow: for better or worse, for richer or poorer, until debt do us part.

I know nothing about sex, because I was always married.
- Zsa Zsa Gabor

My wife assures me she didn't sleep with Tiger Woods, but how can I believe her?
- Tim Piper

Sex when you’re married is like going to the 7-Eleven: There’s not much variety, but at three in the morning, it’s always there.
- Carol Leifer

Marriage is like retiring as a bachelor and getting a sexual pension. You don't have to work for the sex any more, but you only get 65% as much.
- Aristotles ‏@AristotlesNZ

I spent a couple of hours defrosting the fridge last night, or as she likes to call it, "foreplay."
- (Unknown Author)


Playboy is coming out with a new magazine for married men - every month the centerfold is the same woman.
- (Unknown Author)

I never knew how exciting dating could be until I got married.
- Melanie White

I finally got married. I have fun introducing my bride as “my first wife.” For some reason she doesn’t think that’s funny.
- David Roth

So I hope husbands and wives will continue to debate and combat
Over everything debatable and combatable
Because I believe a little incompatibility is the spice of life
Particularly if he has income and she is pattable.
- Ogden Nash

More marriages might survive if the partners realized that sometimes the better comes after the worse.
- Doug Larson

A good marriage is one where each partner secretly suspects they got the better deal.
- Anonymous

Or go back from "Funny Marriage Quotes" to "Cute Quotes: Marriage, Kids, etc."