These Funny Ronald Reagan quotes highlight the humor of the Teflon President, and favor the flavor of his self-deprecating wit. He had a great delivery. He loved jokes, quips, one-liners, and left us some really funny quotations.

Links to more political jokes and quotes at the bottom.
Share your own jokes or feedback in the Comment box. 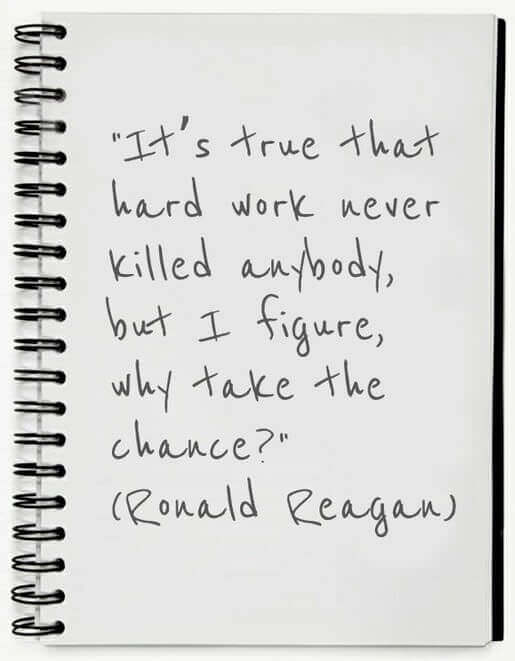 Thomas Jefferson once said, "We should never judge a president by his age, only by his works." And ever since he told me that, I stopped worrying.

I never drink coffee at lunch. It keeps me awake in the afternoon.

I have left orders to be awakened at any time in case of national emergency, even if I'm in a cabinet meeting.

Politics is not a bad profession. If you succeed there are many rewards, if you disgrace yourself you can always write a book.

The government is like a baby's alimentary canal, with an appetite at one end and no responsibility at the other.

Spoken during a radio microphone test:
My fellow Americans, I am pleased to tell you I just signed legislation which outlaws Russia forever. The bombing will begin in five minutes.

On Clint Eastwood running for Mayor:
What makes him think a middle-aged actor, who's played with a chimp, could have a future in politics?

I have learned that one of the most important rules in politics is poise, which means looking like an owl after you have behaved like a jackass.

It’s hard when you’re up to your armpits in alligators to remember you came here [to Washington] to drain the swamp.

The current tax code is a daily mugging.

It’s true that hard work never killed anybody, but I figure, why take the chance?

I have wondered at times what The Ten Commandments would have looked like if Moses had run them through congress.

The most terrifying words in the English language are “I’m from the government and I’m here to help.”

Before I refuse to take your questions, I have an opening statement.

There are advantages to being elected President. The day after I was elected, I had my high school grades classified as top secret.

One way to make sure crime doesn't pay would be to let the government run it.

I’ve often said there’s nothing better for the inside of a man than the outside of a horse.

Spoken as he refused a mule for a gift:
I'm afraid I can't use a mule. I have several hundred up on Capitol Hill.

The taxpayer is someone who works for the federal government but doesn't have to take a civil service examination.

Some of you may remember that in my early days I was a sort of a bleeding heart liberal. Then I became a man and put away childish ways.

Professional politicians like to talk about the value of experience in government. Nuts! The only experience you gain in politics is how to be political.

Abortion is advocated only by persons who have themselves been born.

Government's view of the economy could be summed up in a few short phrases:  If it moves, tax it.  If it keeps moving, regulate it. And if it stops moving, subsidize it.

We were poor when I was young. But the difference then was the government didn’t come around telling you you were poor.

To Walter Mondale at a 1984 Presidential debate:
I want you to know also I will not make age an issue of this campaign. I am not going to exploit for political purposes my opponent's youth and inexperience.

To his wife Nancy, after he was shot in a 1981 assassination attempt:
Honey, I forgot to duck.

To the medical team in the operating room just after his 1981 assassination attempt:
I hope you're all Republicans.

Or go back to "Jokes and Quotes: Politics, Government and Church"