These George Bush jokes testify that he was cannon fodder for more funny stuff than any politician since.......Bill Clinton.

Links to more political jokes and quotes at bottom of page.
Share your own jokes or feedback in the Comment box. 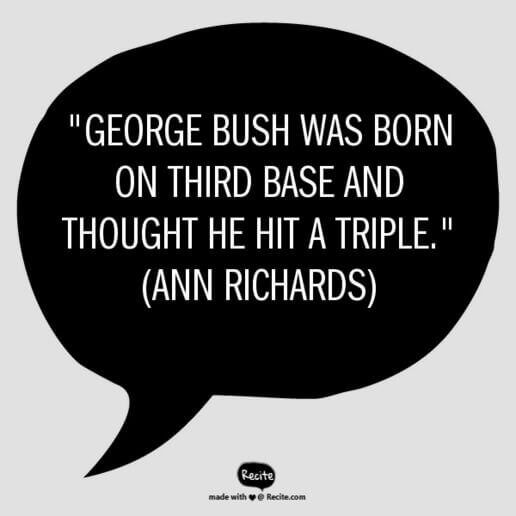 There was an embarrassing moment in the White House earlier today. They were looking around while searching for George Bush's military records. They actually found some old Al Gore ballots.
- David Letterman

It was reported in the paper that President Bush received a 'warm reception' from the Daytona 500 drivers. Well sure, the drivers had never met anyone who was sponsored by more oil companies than they were.
- Jay Leno

There was a scare in Washington when a man climbed over the White House wall and was arrested. This marks the first time a person has gotten into the White House unlawfully since...President Bush.
- David Letterman

Bush reiterated his stand to conservatives opposing his decision on stem cell research. He said today he believes life begins at conception and ends at execution.
- Jay Leno

George’s answer to any problem at the ranch is to cut it down with a chainsaw. Which I think is why he and Cheney and Rumsfeld get along so well.
- Laura Bush

On a lovely March afternoon a well-dressed lady walks up to the White House main gate. She tells the Marine Guard, "I’m here to see President Bush."

The guard replies, “Ma’am, George Bush does not live here. He’s not the president anymore.”

The lady says, “Thank you,” and walks off down the street.

The next day the same lady is back. She comes up to the same guard and says, “I’ve come to see President Bush.”

The Marine patiently explains, “Ma’am, I explained yesterday that George W. Bush does not live here anymore. He is not the president anymore.”

Again the lady thanks the Marine and walks on.

The following day the lady returns a third time. She approaches the same guard and says, “I’m here to see President Bush.”

By now the guard is growing exasperated. He says, “Ma’am, I’m sorry but I’ve already explained to you three days in a row that George W. Bush does not live here any more. He’s no longer President of the United States.”

The lady smiles and says, “I know, but I never get tired of hearing it.”

An old Texas cattle rancher was showing a Texas beef buyer around his spread, and they got onto the subject of George W. Bush being the head of the country.

The rancher observed, “That George Bush is what we call a post turtle.”

The beef buyer said, “Not sure I’ve ever heard that term. What’s it mean?”

The rancher explained, “If you ever happen to see a turtle up on top of a fence post, right away you know four things. You know he didn’t get up there on his own, you know damn well he doesn’t belong up there, you know he’s helpless to do anything, and the kindest thing you can do is help the poor bastard down before things get messy."

When Albert Einstein passed away, he was greeted at the gates of heaven by St. Peter.

“We get a lot of impostors up here," said St. Peter. "So I’ll need you to prove who you really are,”

Einstein said, “Of course. May I have a pencil and paper?” He then proceeded to diagram the complicated formula for General Relativity.

Not long after that, Pablo Picasso showed up. St. Peter gave him the same speech, and

Picasso asked for a pencil and paper. He then proceeded to draw a beautiful scene of heaven that only the real Picasso could do.

Awhile later George W. Bush arrived. St. Peter greeted him with the same request, and explained that both Picasso and Einstein had just proved their identity.

George W. got a confused expression, then said, “Don’t misunderestimate me, but who are Picasso and Einstein?”

There was one kind of embarrassing moment when President Bush was asked if he ever went AWOL and he said, "No no no, we have Earthlink."
- Jay Leno

President Bush's dog Spot passed away. So they took Spot back to the ranch in Texas and buried him next to, I believe, 10,000 Al Gore ballots.
- David Letterman

George Bush was born on third base and thought he hit a triple.
- Texas Governor Ann Richards

The Pentagon still has not given a name to the Iraqi war. Somehow 'Operation Re-elect Bush' doesn't seem to be popular.
- Jay Leno

I stand by this man. I stand by this man because he stands for things. Not only for things, he also stands on things. Things like aircraft carriers and rubble and recently flooded city squares. And that sends a strong message, that no matter what happens to America, she will always rebound - with the most powerfully staged photo ops in the world.
- Stephen Colbert 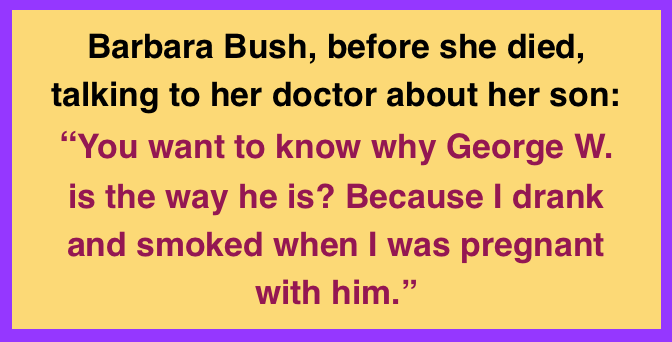 Or go back to "Jokes and Quotes: Politics, Government, and Church"