Mucho laughs a day keep the retirement blues away! Short retirement jokes and senior citizen jokes for all current and would-be retirees. 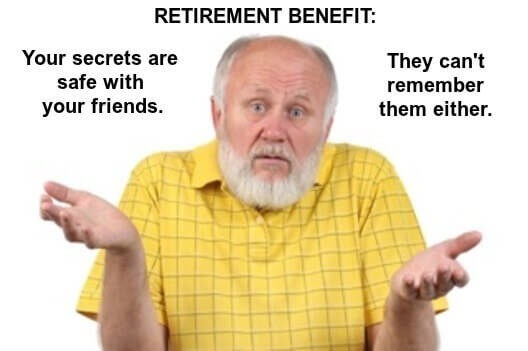 A retired couple had dinner at their friends’ house, and after eating, the wives left the table and went to the kitchen.

The two men were talking and one said, “We've been going to a new restaurant and it’s really great. I’d recommend it very highly.”

The other man asked, “What’s the name of the place?”

The first man thought awhile and finally said, “What are those flowers you send a woman you love? The ones with red petals and thorns?”

“You must mean roses,” he replied.

“That’s it,” said the man. He yelled to his wife, “Rose, what’s the name of the new restaurant we like?”

A retired lady needed some extra cash, so she got a guitar and took some lessons. Then she learned some of her generation’s  favorite oldies.

Then she got herself hired by a nursing home to sing for patients by their bedsides.

After serenading one bedridden older lady, she got up to leave and said, “I hope you get better soon.”

The patient replied, “I hope you get better too.”

One of them looks across at her partner and says, “I know we’ve been playing bridge every week for two years, but I can’t remember your name. Could you please tell me again?”

Her partner looks at her for a long moment and finally replies, “How soon do you need to know?”

Senior Citizen Jokes:
That's Not What I Said!

Herm is 85 years old and retired. He gets a checkup with his physician. A week or so afterward the doc sees Herm strolling the boardwalk with his arm around a beautiful, comely young female.

The doctor stops him and asks, “Herm, you must be feeling terrific, yes?”

Herman says, “Just following orders, Doc. You told me to get a hot mama and be cheerful."

The physician exclaims, “Herm, that's not what I told you! I said, ‘You got a heart murmur. Be careful.’”

A elderly retiree wobbled gingerly into an ice cream shoppe and carefully, slowly climbed up onto a counter stool. He wheezed for a minute, then ordered a chocolate sundae.

A retiree said to his 80 year old friend, “It it true you’re getting married?”

“Rich? Heck, she's so poor she can't even pay attention.”

“She must be great in the sack then?”

“I haven't actually found out.”

“My God, man, why are you marrying her?”

“She can still drive.”

Short Retirement Jokes:
How Do You Feel?

Two old guys from a senior center were sipping lemonade on the porch.

One asks the other, “Ralph, I’m 92 years old and even my aches have pains. You must be close to my age. How are you feeling?”