Older folks know that senior citizen jokes liven up the joint and loosen up the joints. If you want to set a good example, misbehave at every opportunity. Fill your life with funny stuff. Live long and prosper!

Links to more great senior humor at bottom of page.
Share your own jokes or feedback in the Comment box. 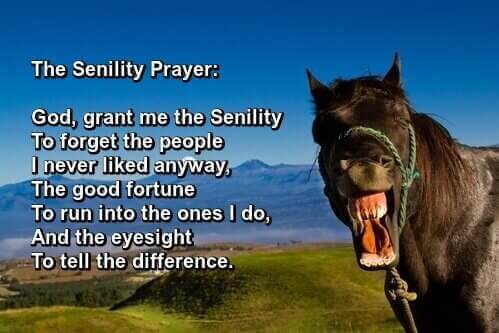 As a senior citizen was driving down the freeway, his cell phone rang. Answering, he heard his wife's urgent voice warning him, "Herman, I just heard on the news that there's a car going the wrong way on Interstate 77. Please be careful!”

George and Edith had been high school sweethearts 50 years ago, but had gone their separate ways after graduation. Then, two years ago, their paths crossed again, and they began seeing each other regularly.

With age 75 just around the corner, they decided life was too short, and they might as well spend the rest of their lives together.

Excited about their decision to marry, they went for a stroll to discuss the wedding, and found themselves in front of a drugstore. George said, "Let’s go in. I have an idea."

Addressing the man behind the counter, George asked, "Are you the owner?" The pharmacist answered, "Yes sir, I am. How can I help you?"

George: "Do you sell heart medications?"
Pharmacist: "Of course."

George: "What about medications for rheumatism, osteoporosis and arthritis?"
Pharmacist: "All kinds."

George: "You sell wheelchairs, walkers and canes?"
Pharmacist: "Yes, indeed. But why all these questions?"

George smiled, glanced shyly at Edith and replied, "We’ve decided to get
married and we’re considering you for our bridal registry."

While waiting for her first appointment in the reception room of a new doctor, a woman noticed the doctor's medical school certificate on the wall, which bore his full name.

Suddenly, she remembered that a tall, handsome boy with the same name had been in her high school some 45 years ago.

Upon seeing him, however, she quickly discarded any such thought. This balding, gray-haired man with the deeply lined face was too old to have been her classmate.

After her exam, she asked him if he had attended the local high school.

"When did you graduate?" she asked

"Why, you were in my class!" she exclaimed.

He looked at her closely and then asked, "What did you teach?"

An elderly man in Louisiana had owned a large farm for several years. He had a large pond in the back. It was properly shaped for swimming, so he fixed it up nice with picnic tables, horseshoe courts, and some apple, and peach trees.

One evening the old farmer decided to go down to the pond, as he hadn't been there for a while, and look it over. He grabbed a five-gallon bucket to bring back some fruit. As he neared the pond, he heard voices shouting and laughing with glee.

As he came closer, he saw it was a bunch of young women skinny-dipping in his pond. He made the women aware of his presence and they all went to the deep end. One of the women shouted to him, “We're not coming out until you leave!”

The old man frowned, “I didn't come down here to watch you ladies swim naked or make you get out of the pond naked.”

Holding up the bucket he said, “I'm just here to feed the alligator.”

Recent widow who has just buried fourth husband looking for someone to round out a six-unit plot. Dizziness, fainting, shortness of breath not a problem.

Active grandmother with original teeth seeking a dedicated flosser to share rare steaks, corn on the cob, and caramel candy.

I usually remember Monday through Thursday. If you can remember Friday, Saturday, and Sunday, let’s put our two heads together.

I still like to rock, still like to cruise in my Camaro on Saturday nights, and still like to play the guitar. If you were a groovy chick, or are now a groovy hen, let’s get together and listen to my eight-track tapes.

Ready for more? Check out these links: