Clean funny senior citizen jokes for senior folks who can take a joke and make a joke. Help yourself to these free clean jokes for a funny inner workout.

Grandpa was telling his young grandson what life was like when he was a boy.

"In the winter we’d ice skate on our pond. In the summer we could swim in the pond, and pick berries in the woods. We’d swing on an old tire my dad hung from a tree on a rope. And we had a pony we rode all over the farm."

The little boy was amazed, and sat silently for a minute. Finally he said, "Granddad, I wish I'd gotten to know you a lot sooner!"

Three seniors are out for a stroll.
One of them remarks, “It’s windy.”
Another replies, “No way. It’s Thursday.”
The last one says, “Me too. Let’s have a soda.”

An elderly man was having hearing problems and went to see a specialist. The doctor fitted him with some hearing aids that brought his hearing back to full strength.

After a few weeks the man came back to make sure the new equipment was working properly, which it was.

The hearing specialist said, “It all seems perfect. Your family should be delighted you can hear everything now.”

“Oh no,” the man responded. “I haven’t told any of them. I just sit quietly, listening carefully. I’ve changed my will four times.”

Hospital rules state that patients checking out must have a wheelchair.

One day a newly graduated nurse assistant came into the room to find an elderly man fully dressed. He was sitting on the bedside chair, with a piece of packed luggage at his side, all ready to go.

When he was shown the wheelchair, he was adamant that he was fully capable of walking himself to the parking lot.

But the assistant told him rules were rules, so he relented and let her wheel him out.

In the elevator, the assistant asked the elderly man if his wife was coming to meet him.

“I don’t think so,” he replied. “It takes her awhile to change her clothes, so she’s probably still upstairs in the bathroom taking off of her hospital gown and getting dressed.”

A couple in their nineties are both having some short term memory loss.

While in for a checkup, the physician says that physically they’re okay, but since they’re having trouble remembering things, they might want to start writing things down.

Later that evening they’re sitting and reading, when the husband gets up.

“Would you like anything from the kitchen?” he asks.

“Shouldn’t you write it down so you don’t forget it?” she asks.

“Well,” she says. “A few raspberries on top would be great. You want to write that down?”

“I’ve got it, honey. A bowl of vanilla ice cream with raspberries on top.”

“And chocolate sauce, too. Maybe you’ll forget that. Want me to write it down for you?”

A little miffed, he replies, “I’ve got it! Ice cream, raspberries and chocolate sauce. I don’t need it written down, for gosh sakes!”

He waddles out to the the kitchen. A half hour later, he comes back with a plate of ham and scrambled eggs, and gives it to his wife.

She stares at the plate a few seconds, then says, “You forgot my toast.” 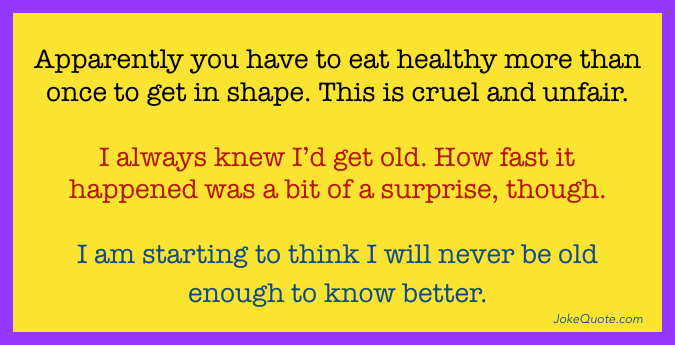 On an overseas flight, a lawyer and an older man were in adjoining seats.

The lawyer asked the senior if he’d like to play a little game. The older man was tired, and he told the lawyer he only wanted to sleep.

But the lawyer insisted the game was a lot of fun.

The senior figured if he just got this over with, maybe he could get some sleep. So he agreed to play.

The first question from the lawyer was “How far apart are the earth and the moon?”

The senior stayed completely silent, reached for a dollar, and gave it to the lawyer. Then he said, “My turn. What walks upstairs backward and comes downstairs forward?”

The lawyer was stumped. He thought and thought. He tried to remember all the riddles he knew. He searched every corner of his brain.

He even cheated and asked the flight attendants and other passengers.

Finally he gave up. He woke up the older man and gave him a twenty. The senior stuffed the twenty in his coat and went immediately back to sleep.

The lawyer couldn’t stand it. He woke up the older man and said, “I have to know. What walks upstairs backward and comes downstairs forward?”

The senior got out his wallet, gave the lawyer a dollar, and went back to sleep.

or Return to "The Best Clean Funny Jokes"