65th birthday jokes to help you smile awhile at your milestone, and hone your funnybone. Funny quotations for cruising into the Golden Age with your sense of humor intact. 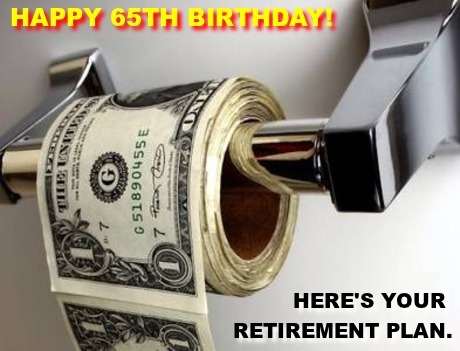 We were going to put 65 candles on your cake, but we were afraid a jet might mistake it for a runway.

Turning 65 means sometimes you laugh so hard the tears run down your leg.

You know you’re turning 65 when you start ordering drive-up food at a mailbox.

When you hit 65, “Rock ‘n Roll” no longer describes your music, but your chair options: rocking or wheel.

What’s the best thing about turning 65?
No more calls from life insurance salesmen.

We wanted to put 65 candles on your cake, but it would have been the size of a coffin.

Retirement at sixty-five is ridiculous. When I was sixty-five I still had pimples.
- George Burns

My my, 65! I guess this marks the first day of the rest of our life savings.
- H. Martin

On my 65th birthday, I’m going to lie down in a crop circle and wait for aliens to abduct me. That’s my retirement plan.
- from a cartoon by Randy Glasbergen

I'm 65 and I guess that puts me in with the geriatrics. But if there were fifteen months in every year, I'd only be 48.
- James Thurber

At 65 I don’t mind watching my grandkids. It’s when I have to run after them that‘s the problem.
- Melanie White

Get ready for the 65-year-old shuffle: shuffling along, shuffling cards, and playing shuffleboard.
- Greg Tamblyn

At 65 if you wake up and nothing hurts it means you died in the night.
- Unknown Author

65 is when you start to have weird hobbies, like growing giant radishes and collecting aluminum foil.

By 65 you tend to sleep more soundly. But it’s usually in the afternoon.

Good news: at 65 there is no noticeable decline in memory storage.
Memory retrieval, however, is something else.

Advice for 65-year-olds: use valet parking.
Valets don’t forget where they parked your car.

Crows feet and wrinkles are usually stretched out by going braless.

Want to look younger at 65? Remove your glasses before looking in mirror.

Want to give your 65-year-old husband some instant energy?
Tell him you’re pregnant.

Advice for when your wife is going through menopause:
If you’re good with tools, you can remodel the garage. When you’re finished, you’ll have somewhere to live.

Where can 65-year-old men find younger women who are interested in them?
In the bookstore, under “Fiction.”

Turning 65 means never passing up:
1. A restaurant Groupon
2. Free samples at Costco
3. A place to pee

Now that I’m 65 and ready to read all those books I have piled up, it’s too bad I can’t see the words.
- Melanie White

I'm at the age where an "all-nighter" just means I didn't have to get up to pee.
- Jack Mackenroth ‏@jackmackenroth

Being 65 means your kids think you have all the time in the world to babysit.
- Melanie White

Now that I’m 65 and re-tired does that mean I need new tread?
- Melanie White

At 65, my grandkids are a lot cuter in pictures than they are running around messing up my house.
- Melanie White

65 years old is when you wake up in the morning looking forward to that nap in the afternoon.
- Greg Tamblyn 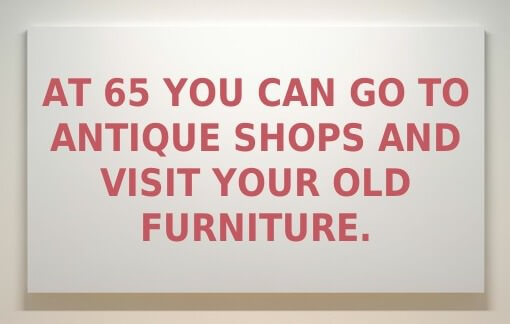 At 65, “getting down” on your birthday means not necessarily getting back up.

By 65, you're telling your pals that all your aches and pains are old sports injuries.

At 65 it’s important to be on time for your birthday party. If you’re a few minutes late, everybody might be napping.

We were going to put 65 candles on your birthday cake, but we didn’t want it to look like a torchlight procession.

65 means waking up with that “morning after” feeling even when you stayed home and went to bed early.

Congrats - 65! You're another year older and wiser. Except when it has anything to do with technology.

At 65, almost anyplace works for a nap.

Happy 65th! If you spent your first few decades laughing at old people, guess what? Karma's a bitch!

At 65 you start wearing Depends just in case somebody throws you a surprise party.

At 65, if people start turning away and sniffing, it just means you’re an old fart.

At 65 your body is still a temple, but the steeples are pointing downward.

At 65, "getting lucky" means finding your cell phone in your dirty laundry.

One day a huge explosion at a chemical plant produced a raging fire. Minutes later, fire trucks sped in from all corners of the city.

The owner of the chemical plant told the fire chief in charge that all the valuable formulas were in a safe in the company offices, located in a part the burning plant. He offered $100,000 for the safe rescue of the formulas.

The firemen worked relentlessly and bravely, but couldn’t stop the fire. The reward was doubled, but to no avail. The fire was spiraling out of control.

Then just as things were looking bleak, they heard a siren in the distance. Seconds later another fire truck raced in at full speed with a company of volunteer firemen, all retired guys 65 and older.

The volunteer fire truck never even slowed down, just crashed right through the inferno into the center of the burning building. The old guys jumped out of the truck and started firefighting like maniacs.

Finally they managed to control the fire, and eventually extinguished it. The valuable formulas were saved. The plant owner was deliriously happy.

He found the volunteer chief and told him about the reward. “So what are you gonna do with all that money?” he asked.

“Well the first thing,” replied the chief, “is we’re gonna get the brakes fixed on that damn truck.”

or back to the Home Page: "Funny Jokes, Funny Quotes, Funny Sayings"