Funny 60th birthday quotes to loosen up your laugh lines and lighten up with gag time. Funny stuff to graduate from the fifties with humor. Upward! 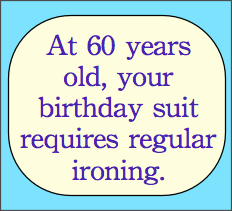 Now that I’m 60, every morning I look in the mirror and say, “I don’t know who you are, stranger, but I’m gonna shave you anyway.”
- Milton Friedman, presidential speechwriter

You have to stay in shape. My grandmother started walking five miles a day when she was sixty. She’s 97 today and we don’t know where the hell she is.
- Ellen DeGeneres

You know you’re turning 60 when your husband wants a DNA sample to make sure you’re the same woman he married.
- Anonymous

When you’re 60, nothing works like it used to, especially not my husband.
- Melanie White

One good thing about being 60 is you argue less. It’s not so much that you’re nicer, you just can’t hear each other.
- Anonymous

You start boring complete strangers with your medical problems.

It's like going to a haunted house. Lots of creepy noises and smells you can’t explain.

A nap chance sounds better than a lap dance.

You save all your important reading for the bathroom.

Life is no longer just a pain in the ass. Everything else hurts too.

It takes four people to light the candles on your cake before the first ones have gone out.

It’s not the cop, it’s the doctor who’s telling you to slow down.

You shut off the lights for the cost benefits instead of the sex benefits.

For breakfast, you actually eat cereal instead of last night’s chicken wings and leftover pizza.

You say things like, “little shaver,” “teenybopper,” “whippersnapper,” “wet behind the ears,” and “snotnosed punk.”

Amusement park tickets cost more for your grandkids than you.

Other people say you look great, then add, “for your age.”

Your recliner has more controls than your motor vehicle. 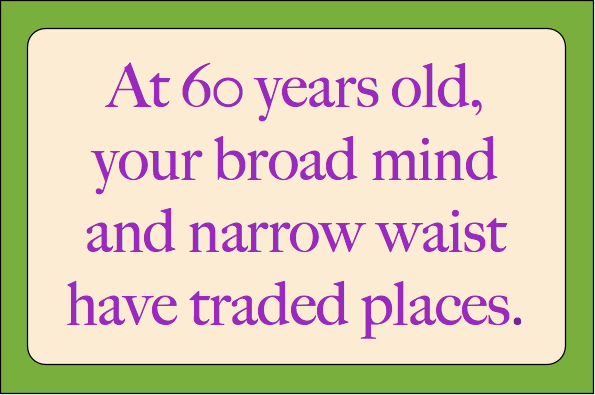 A 60 year old woman goes to see a matchmaker.

One of her criteria is a man with regular bowel movements.

The matchmaker asks, “Does it matter if they’re voluntary?”

Murray, who’s made a fortune in the market and is recently widowed, hasn’t been seen for awhile. But on his 60th birthday he invites his friends to the club for a party.

He shows up with a smashing young blonde in her mid-20s. She’s not only sexy as all get-out, she seemingly adores Murray. She laughs at every clever thing he says, and hangs all over him.

When she goes to the ladies room, his friends zone in and ask him how he landed the trophy squeeze.

“Guys,” says Murray, “I’d appreciate it if you’d refer to her as my wife, since she is.”

“No kidding!” they say. “Was it hard convincing her to marry an older guy?”

“Well, just how young did you tell her you are?”

60: If age is only in the mind, someone should tell that to my bones.
- Melanie White

How can they say my life isn't a success? Have I not for more than sixty years got enough to eat and escaped being eaten?
- Logan Pearsall Smith

At 60, your hair becomes a cosmic joke. It moves from your head to your ears and your nose. And you can’t see it without one of those giant funhouse mirrors.
- Greg Tamblyn

I recently turned 60. Practically a third of my life is over.
- Woody Allen

With sixty staring me in the face, I have developed inflammation of the sentence structure and definite hardening of the paragraphs.
- James Thurber

You might think it’s really nifty
Sixty’s now the brand new fifty
And you would not now have the blues
If your gut had heard the news.