Short hilarious jokes to free your brain and keep you sane. Inject your cranium with some very funny jokes to prevent hyper-seriosity. These jokes have all cracked me up and - FYI - are slightly naughty. 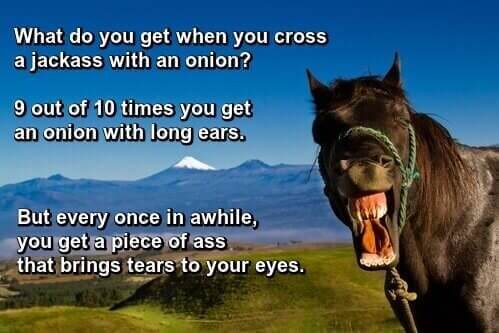 An older man with a touch of dementia wobbles into a Catholic Church, sits down in the confessional booth, but doesn't utter a word.

The Priest coughs, hoping to get a response. But the older man just sits and says nothing.

Finally the Priest raps his knuckles three times on the screen.

A fireman is sitting in front of the station when he sees a little boy coming down the street in a little red wagon. He's put little ladders on the side and a garden hose is coiled in the front.

The kid is wearing a fireman's helmet and the wagon is tied to a dog and cat who are pulling the wagon.

As the red wagon stops in front of him, the fireman observes, "That sure is a nice fire truck you got there."

The fireman looks more closely and sees the boy has the wagon tied to the dog's collar and the cat's testicles.

The fireman says, "Little pardner, I don't mean to tell you how to run your fire truck, but if you were to hook that rope around the cat's collar, I bet he could pull harder."

The kid answered, "I know, but then I wouldn't have a siren."

A woman discovered that her dog - a schnauzer - was going deaf, so she made an appointment with the veterinarian.

The vet found the problem was too much hair in the doggie's ears. So he cleaned and trimmed the hair in both ears, which solved the problem.

The vet then told the woman that if she wanted to prevent this from happening again, she should buy some Nair hair remover, and apply it inside the dog's ears once a month.

On the way home she stopped at the drug store and purchased a bottle. At the register, the pharmacist told her, "If you're going to use Nair under your arms, better not use deodorant for a few days."

She said, "I'm not going to use it for my underarms."

The pharmacist said, "Well, if you're getting it for your legs, avoid body lotion for a day or so."

The woman said, "I'm not using it there either. If you must know, I'm using it on my schnauzer."

The pharmacist said, "Then stay off your bicycle for at least a week."

A soon-to-be-divorced woman had become involved with a man whose job was home pest extermination.

One afternoon they took the risk of a rendezvous at her house, and were in the bedroom when her husband returned returned without warning.

“Oh no, my husband!” she said, and told him to get in the closet. She quickly threw his clothes under the bed and was getting dressed when her husband came in.

He’d been suspecting this for awhile, looked through the bedroom, and found the boyfriend standing there undressed behind the closet door.

“And who the hell are you?” he asked the boyfriend.

“I’m an exterminator from pest control,” the boyfriend replied.

“And what the hell are you doing in my closet?”

“So what happened to all your clothes?”

The boyfriend glanced down and said, “Wow. You really have a serious moth problem.”

You're sitting by a beautiful stream. Songbirds are gently singing. The mountain air is cool and refreshing.

No one else knows this secret place. Nothing can bother you here.

You're in complete seclusion from that other place known as "the world."

The quiet sound of a soothing waterfall fills the air like a cascade of serenity.

The water in the pond beside you is crystal clear.

You can easily make out the face of the person whose head you're holding under the water.

The Best Short Jokes Ever

Or go back to "Short Funny Jokes"