Some of the best short jokes ever, in the unanimous opinion of the Head Lafologist here at JokeQuote. Hopefully you'll laugh your shorts off, or short circuit your brain. In a good way. Out of thousands of very funny jokes, these made the top picks. 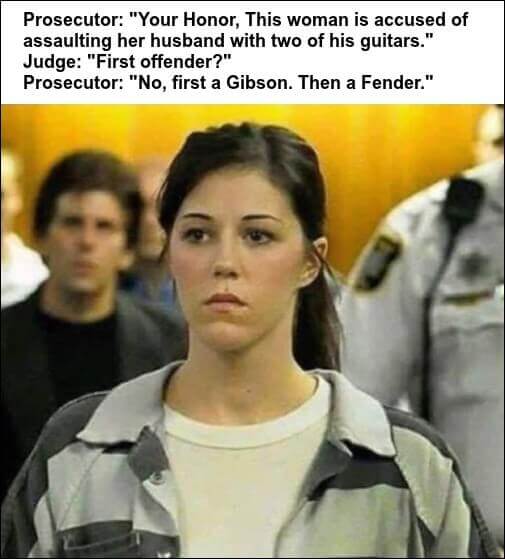 When I was a kid, I used to pray every night for a new bike.

Then I realized that God doesn't work that way.

So I stole a bike and asked Him to forgive me.

A recent immigrant from Poland needed a drivers license, and went to the state licensing bureau.

When it was time for his eye test, the examiner asked him to read a chart of small letters:

“Can you see that clearly and read it back to me?”

“Can I read it?” said the immigrant. “That guy is my best friend.”

A businesswoman is driving down a back road through the Navajo reservation, and she sees an old Navajo woman walking along the side of the road.

It's a hot day so she stops and asks her if she'd like a ride, and the Navajo woman slides in. They chat for awhile, then the new passenger sees a brown bag on the floor of the car.

The businesswoman replies, "It's a bottle of whiskey I got for my husband."

For a moment the Navajo woman is quiet, then says, "Good trade."

A reporter was investigating a psychiatric ward and interviewing a doctor about how they determined who should be committed.

The doctor explained, “We take them into a bathroom where the bathtub is filled with water. We ask them to empty the tub, and give them their choice of a bucket, a tin cup, or a spoon.”

“Ah,” said the reporter. “So a sane person chooses the bucket since it’s the largest.”

“Actually,” replied the doctor, “a sane person just pulls the plug. Would you like me to check you in now?”

A guy woke up on a Saturday morning and realized it was time to do a lot of stuff around the house his wife wanted done.

He washed the outside windows, cleaned the gutters, and was just starting to prune the sidewalk shrubs when a woman drove by, slowed, then stopped.

She leaned out her window and asked him, "What do you charge for trimming hedges?"

The guy paused then replied, "The lady who lives in this house says I can sleep with her whenever I want."

Young Son: Is it true, Dad, that in some parts of Africa a man doesn't know his wife until he marries her?

Dad: That happens in every country, son.

Recently my wife and I were sitting in our den together, she was reading and I was watching pro wrestling.

I told her, "In case it ever comes up, I would would hate to ever live in a vegetative state, dependent on a machine. If that time ever arrives, please pull the plug."

She immediately got up and unplugged the TV.

Best Short Jokes Ever:
The Truth

My little brother wanted to know what happens after we die. I explained that we get dumped in a hole under a pile of dirt, and then worms eat our bodies.

I probably should have told him the truth - that most people go to hell and burn in a lake of fire for all eternity - but I didn't want to upset him.

A man is walking down his street and sees a friend sitting in his front yard all alone, looking bummed.

“What’s the matter with you?” he asks.

The friend says, “I screwed up on one of those questions wives ask, and now I am so deep in the doghouse, I’ll never get out.”

“What question?” the first guy asks.

Two atoms are walking down the street. The first one sees the second one and asks, "Hey, what's the matter? You look a little down."

The second atom says, "Yeah, I lost an electron."

The first atom says, "Oh man, are you sure?"

A plumber was working on our house and asked me what I did.

I told him I was in college, and studying for a B.S. in Geology.

I laughed and said yes.

I said, "What do you think they stand for?"

He said, "M.S. just means 'More of it.' And PhD stands for 'Piled Higher and Deeper."

Return from "The Best Short Jokes Ever" to "Short Funny Jokes"