Although it's fairly certain some of these Yogi Berra quotes didn't come out of his own personal mouth, for sure most of them did. And what the heck - they're funny. 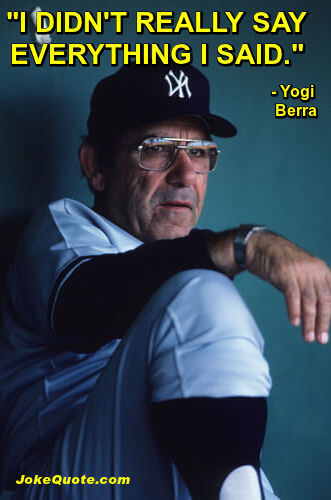 Pair 'em up in threes.

You can see a lot by just looking.

Nobody goes there anymore. It’s too crowded.
- Yogi, on a St. Louis restaurant

It gets late early out there.
- Yogi, on the sun in left field at old Yankee stadium

Thank you for making this day necessary.
- At Yogi Berra Day in his hometown of St. Louis

I don’t know. I’m not in shape yet.
- Yogi, when asked his hat size

You can't hit and think at the same time.

I ain't in no slump. I just ain't hitting.

I never blame myself when I'm not hitting. I just blame the bat and if it keeps up, I change bats. After all, if I know it isn't my fault that I'm not hitting, how can I get mad at myself?

If people don't wanna come out to the park, how are you gonna stop 'em?

If you ask me anything I don't know, I'm not going to answer.

If you can't imitate him, don't copy him.

I always thought that record would stand until it was broken.

You can observe a lot by watching.

I don't hit with my face.
- Yogi’s response to sportswriters saying he was ugly

If I could just make 'em up on the spot, I'd be famous.
- Yogi, when asked for a Yogi-ism

When asked whether a streaker on the baseball diamond was a man or woman, Yogi supposedly replied, “I don’t know, they had a bag over their head.”

Bill Dickey learned me all his experience.

A nickel ain't worth a dime anymore.

Little League baseball is a good thing because it keeps the parents off the streets and the kids out of the house.

I wish I had an answer to that, because I'm tired of answering that question.

It's tough to make predictions, especially about the future.

We made too many wrong mistakes.

Anyone who is popular is bound to be disliked.

It was impossible to get a conversation going, everybody was talking too much.

When you come to a fork in the road, take it.

Baseball is 90% mental and the other half is physical.

I usually take a two-hour nap from one to four.

You should always go to other people's funerals, otherwise, they won't come to yours.

If you don't set goals, you can't regret not reaching them.

You better cut the pizza into four slices, because I'm not hungry enough to eat six.

It's deja vu all over again.

I didn't really say everything I said.

Prediction is difficult. Especially about the future.

It ain't over till it's over.

I knew I was going to take the wrong train, so I left early.

You tell the stupidest questions.

Berra was the sort of person who could fall into a sewer and come out wearing a gold watch.
- Casey Stengel, on Yogi’s luck

Yogi loved talking on the baseball diamond. He talked to hitters. He talked to umpires. He talked to pitchers. He talked to whoever would listen. This led to some classic moments, such as the time the Indians' Larry Doby walked up to the plate and, before Berra could say a word, turned to the umpire and said, "Please tell him to shut up."
- Joe Posnanski

Or the time in Boston that it was so hot that Berra decided to get thrown out of the game. The umpire that day was Cal Hubbard, a former football player who did not listen to much talk before throwing players out of games. Berra figured it would be easy. So he made a few cracks. Hubbard didn't say a thing. Then, Berra started openly arguing about balls and strikes. Again, Hubbard didn't say a thing. Finally, Berra turned and tried to show up Hubbard, the surest way to get thrown out of the game. Hubbard calmly said, "Berra, if I have to be out here in this heat, so do you."
- Joe Posnanski

Yogi Berra agreed to have his own museum connected to a college baseball stadium in the town next to the one in which he lives, although, as he pointed out in another Yogi-ism, you really are not supposed to get these things until you're dead.
- Joe Posnanski 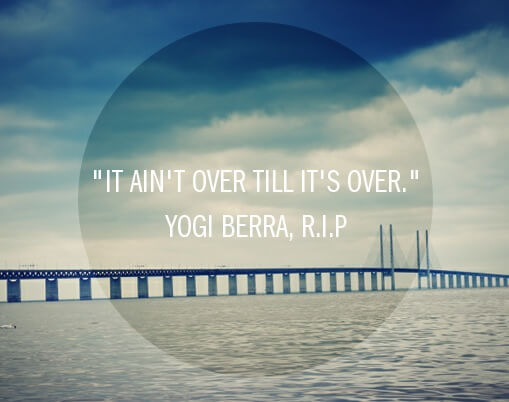 Or go back to "Really Funny Jokes"