All ballplayers should quit when it starts to feel as if the baselines run uphill.
- Babe Ruth

I can remember a reporter asking me for a quote, and I didn't know what a quote was. I thought it was some kind of soft drink.
- Joe DiMaggio

If it weren't for baseball, many kids wouldn't know what a millionaire looked like.
- Phyllis Diller

I knew when my career was over. In 1965 my baseball card came out with no picture.
- Bob Eucker

He showed an early knack for giving up the home run — when he threw a hanging change-up, the ball would dangle in the air long enough to pose for pictures.
- Joe Posnanski, on Jose Lima

Gaylord Perry, famous for doctoring the ball with Vaseline, once contacted the Vaseline company about promoting their product as a paid spokesman. The company wrote him back a one-line postcard: “We soothe babies’ asses, not baseballs.”

I hit a grand slam off Ron Herbel. And when his manager, Herman Franks, came out to get him, he brought Herbel’s suitcase.
- Bob Uecker

Julio Franco played for so many years (23) that Buck O'Neil once approached him and said, "I remember you from the Negro leagues."

Warren Spahn on Stan Musial:
“Once he timed your fastball, your infielders were in jeopardy.”

Don Newcombe on Stan Musial:
“I could have rolled the ball up there to Musial, and he would have pulled out a golf club and hit it out.”

Don Sutton on Bob Gibson:
“He hated everyone. He even hated Santa Claus.”

Hank Aaron’s advice to Dusty Baker on batting against Bob Gibson:
Don’t dig in against Bob Gibson, he’ll knock you down. He’d knock down his own grandmother.
Don’t stare at him. Don’t smile at him. Don’t talk to him. He doesn’t like it.
If you happen to hit a home run, don’t run too slow and don’t run too fast.
If you want to celebrate, get in the tunnel first.
And if he hits you, don’t charge the mound because he’s a Golden Gloves boxer. 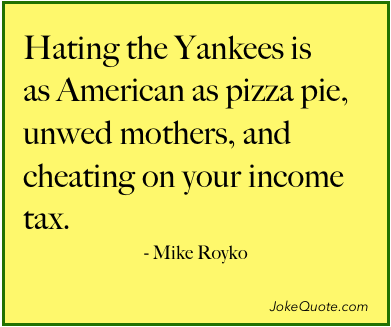 Winning is the most important thing in my life, after breathing. Breathing first, winning next.
- George Steinbrenner

I wasn’t mean. I was just doing my job. You hear people talk about this glare that I had. You know, I’ve been wearing glasses for almost 60 years. I wasn’t glaring … I just couldn’t see the catcher’s signals. I was just trying to see, that’s all.
- Bob Gibson

Being with a woman all night never hurt no professional baseball player. It's staying up all night looking for a woman that does him in.
- Casey Stengel

I’ll never make the mistake of being 70 again.
- Casey Stengel

The coach put me in right field only because it was against the rules to put me in Sweden, where I would have done less damage to the team.
- Dave Barry, on Little League

In 1962 I was named Minor League Player of the Year. It was my second season in the bigs.
- Bob Eucker

The 1958 Kansas City Athletics lost 81 games. That was, perhaps, the best of all the Athletics teams to play in Kansas City, though this seems a bit like saying that Cocoa Krispies is the healthiest of all the cereals that begin with the word "Cocoa."
- Joe Posnanski

The Angels could take batting practice in a hotel lobby and not break the chandelier.
- Pitcher Bill Lee, on the 1975 California Angels lack of hitting

For the Red Sox fan, this whole month Carly Simon has been singing, the ketchup bottle was open and upended.... Last night, out plopped a lump of pus, ruining our hamburger.
- Ray Charbonneau, on the Sox blowing a 9 game lead to the Rays in September, 2011

One time, I got pulled over at four a.m. I was fined $75 for being intoxicated, and $400 for being with the Phillies.
- Bob Eucker

Baseball must be a great game to survive the fools who run it.
- Bill Terry

You start chasing a ball and your brain immediately commands your body to 'Run forward, bend, scoop up the ball, peg it to the infield,' then your body says, 'Who me?'
- Joe DiMaggio

[Russell Martin was] hacking away as if he were swatting at last night’s bad dreams.
- David Waldstein

Winfield goes back to the wall. He hits his head on the wall. And it rolls off! It’s rolling all the way to second base! This is a terrible thing for the Padres!
- Jerry Coleman, announcer

Two thirds of the earth is covered in water. The other third is covered by Garry Maddox.
- Ralph Kiner, broadcaster

When George Steinbrenner asked his manager Buck Showalter why he didn't buy a house, Showalter replied, "Because I work for you."

This Royals season has already been as steady as a toddler on a sugar rush.
- Sam Mellinger

They said I was such a great prospect that they were sending me to a winter league to sharpen up. When I stepped off the plane, I was in Greenland.
- Bob Eucker

The best thing about baseball is there’s no homework.
- Dan Quisenberry

You can describe baseball in one word: 'Youneverknow.'
- Joaquin Andujar

He's like a little kid in a gorilla body.
- Alex Gordon, on Salvadore Perez

it is in the field that Aoki is a particular joy to watch; I have never seen a player look so confused while making so many good plays. It is like Aoki’s mind is a lost GPS voice repeating, “Still calculating.”
- Joe Posnanski

I sprung for some nice [World Series] tickets in Section 117, just past third base. As a medical professional, I am quite aware that you can live a full and normal life with just one kidney.
- Rany Jazayerly

The [2014] Royals really are the closest baseball thing to a Coen Brothers movie.
- Joe Posnanski

Over time, Yost may not be the equal of Buck Showalter (whom he beat) or Bruce Bochy (with whom he’s even now). And he sometimes says things that seem to beg for punch lines. (Wednesday night: “After the sixth inning, my thinking is done.” So you’re saying it began at some point?)

Royals reliever Kelvin Herrera made a conscious effort to change the speeds of his pitches this year [2014], and in Game 2 of the World Series, it paid off. He threw a fastball 101 mph, then dropped down to 100, then went back up to 101. You can see why opposing hitters might be confused, and also why they would want to curl up with a good book and hit themselves over the head with it.
- Michael Rosenberg, Sports Illustrated

Eric Hosmer is a generally lumbering first baseman, and Billy Butler might be the slowest player in baseball, and any complicated running play with these two is destined to become a Will Ferrell movie.
- Joe Posnanski

[Royals Pitcher Kelvin] Herrera was wearing Billy Butler’s helmet and Alex Gordon’s batting glove and holding Alcides Escobar’s bat. Unfortunately, none of those guys loaned him a swing. At one point Herrera almost fell backward out of the batter’s box while swinging at an outside pitch, which he somehow fouled off.
Afterward, Herrera made World Series history by uttering this sentence: “I feel proud of myself because I touch the ball.”
- Michael Rosenberg, Sports Illustrated online

When a tree falls in the forest and no one is around, it is so the tree can avoid Madison Bumgarner.
- Joe Posnanski

Madison Bumgarner doesn’t just have the Royals’ number. He has their bank accounts and e-mail passwords, and he changes the code on their garage-door openers because it amuses him.
- Michael Rosenberg, Sports Illustrated

Or go back from "Funny Baseball Quotes" to Really Funny Jokes

Or back to the Home Page