Baseball Jokes For Fans... of Humor

Baseball jokes and hilarious quotes about the great American pastime. For everyone who ever swung and missed, these short clean jokes will help you connect. Funny stuff about hitting, pitching, winning, losing, knuckleballs, intelligence, philosophy, and other stuff to make your day a home run.

The knuckleball is a curveball that doesn't give a damn.
- Jimmy Cannon

The knuckleball is a butterfly with hiccups.
- Willie Stargell

Knuckleballs are like snowflakes -- no two alike.
- Jason Varitek

Hitting the knuckler is like eating soup with a fork.
- Richie Hebner

Hitting the knuckler is like eating jello with chopsticks.
- Bobby Murcer

Hitting a knuckleball is like trying to hit a butterfly in a typhoon.
- Anonymous

Catching the knuckleball is like trying to catch a butterfly with tweezers.
- Tim McCarver

The way to catch a knuckleball is to wait for it to stop rolling and then pick it up.
- Bob Uecker

When a knuckleball pitcher throws the pitch, he doesn't know if the baseball is going to dive down, slide one way or another, take a surprising hop or -- and every good knuckleball pitcher has felt this -- do nothing at all, just casually stroll toward the plate at 65 or 70 mph where it will meet its maker like a wide receiver running blindly (and straight up) into James Harrison's zone.
- Joe Posnanski

Baseball Jokes:
"The Yankees and Steinbrenner"

There’s nothing more limited than being a limited partner of George Steinbrenner [and the Yankees].
- John McMullin, owner of the Houston Astros

I could never play for New York. Whenever I get into the bullpen car they tell me to lock the doors.
- Mike Flanagan

The Red Sox get into the Series thanks to the fact that the Yankees - who were leading the American League championships three games to none, and have all-stars at every position, not to mention a payroll larger than the gross national product of Sweden - chose that particular time to execute the most spectacular choke in all of sports history, an unbelievable Gag-o-Rama, a noxious nosedive, a pathetic gut-check failure of such epic dimensions that every thinking human outside of the New York metropolitan area experiences a near-orgasmic level of happiness. But there is no need to rub it in.
- Dave Barry, 2004 year in review

Two elderly baseball fans, Joe and Wally, have known each other since they were kids. One day Wally learns he’s got an incurable disease and doesn’t have much time left. He calls Joe to tell him the news.

Joe says, “Wally, I’m so sorry. We’ve been friends forever, playing minor-league ball together and loving the game so much, and man, I’m really going to miss you. Hey, you know what, when you get to heaven, will you try and let me know if there’s baseball up there?”

Wally replies, “Joe, you’ve been my best pal since we were kids. If there’s any way, I’ll be in touch and let you know if there’s baseball in heaven.”

Joe sits up straight. "Who’s that?" he asks.

"You can’t be Wally. Wally just passed away."

“Well it's me, Wally! Joe, I’m in heaven, and they told me I could get in touch with you and let you know about baseball in heaven."

Wally says, "The good news is yes, we have baseball here in heaven. Even better is all our old pals are here too, we’re all young again, we play like we did on our best days and we never get tired. Even better, the weather’s always perfect and we can play all we want!”

Joe is ecstatic. "Wally, that’s great, I’m so happy for you. So what's the not-so-good news?"

The secret of managing is to keep the guys who hate you away from the guys who are undecided.
- Casey Stengel

There comes a time in every man's life and I've had many of them.
- Casey Stengel

“You’re going to manage someday. You’re going to be interviewed a lot, and you’ve got to handle the media. They’re going to come for interviews and here’s the way you handle it. The first thing you say is, how much time you got? They say 10 minutes. How many questions you gonna ask me? They say three. Let them ask you the first question, keep talking for 10 minutes, and you only get in one-third the trouble.”
- Casey Stengel’s advice to Whitey Herzog

- Earl Weaver on umpire Steve Palermo:
I think I know what Palermo's problem is. About the fifth inning of every game, he needs a diaper change.

- Earl Weaver on umpire Steve Palermo:
He's just a young punk. I question his integrity, but I respect the umpire's uniform. Otherwise, he might be dead.

- Umpire Steve Palermo on Earl Weaver:
He's a pest, an insult to baseball, a clown that goes under the guise of a manager.

- Earl Weaver on bunting:
I've got nothing against the bunt -- in its place. But most of the time that place is the bottom of a long-forgotten closet.

- Earl Weaver on religion:
When Pat Kelly told him it was wonderful to walk with the Lord, Weaver said, "I'd rather you walk with the bases loaded."

Al Bumbry, in the middle of a slump, told Weaver he was going to church to pray.
Weaver replied, "Take your bat."

- Earl Weaver on Jim Palmer:
Every time (Jim) Palmer reads about a new ailment, he seems to get it. ... Someone once asked me if I had any physical incapacities of my own. Know what I answered? 'Sure I do,' I said. 'One big one: Jim Palmer.'

- Earl Weaver on death:
On my tombstone, just write "The sorest loser who ever lived."

Bob Gibson was so mean, he’d knock you down and then meet you at home plate to see if you wanted to make something of it.
- Dick Allen

I remember one time going out to the mound to talk with Bob Gibson. He told me to get back behind the plate where I belonged, and that the only thing I knew about pitching was that I couldn’t hit it.
- Tim McCarver

The only people I ever felt intimidated by in my whole life were Bob Gibson and my Daddy.
- Dusty Baker

I’ve played a couple hundred games of tic-tac-toe with my little daughter. And she hasn’t beaten me yet. I’ve always had to win. I’ve got to win.
- Bob Gibson

I have only one superstition. I touch all the bases when I hit a home run.
- Babe Ruth

What are we at the park for except to win? I’d trip my mother. I’d help her up, brush her off, tell her I’m sorry. But mother don’t make it to third.
- Leo Durocher

I think we have a pretty good chance to win if we get more runs than they do.
- Willie Wilson

In baseball, you’re either humble or about to be.
- Clint Hurdle 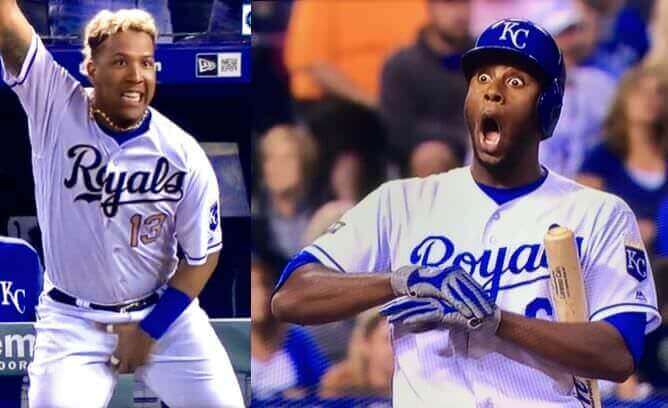 - Carl Erskine, on how to pitch to Stan Musial:
I’ve had pretty good success with Stan by throwing him my best pitch and backing up third.

- Preacher Roe, on how to pitch to Stan Musial:
I throw him four wide ones and try to pick him off first base.

I don’t think [Warren] Spahn will ever get into the Hall of Fame. He’ll never stop pitching.
- Stan Musial

I never threw an illegal pitch. The trouble is, once in a while I toss one that ain't never been seen by this generation.
- Satchel Paige

He's not nasty, he's just frustrating. I'd pull my hair out, but I don't have any.
- Torii Hunter, on pitcher Bruce Chen

I get the ball, I throw the ball, and I take a shower.
Mariano Rivera

Alexander Graham Bell came along, invented the telephone, and as you know the very first words he said on the telephone phone were: "Get Arthur Rhodes up.”
- Joe Posnanski

I want to thank all the pitchers who couldn’t go nine innings, and manager Dick Howser for not letting them.
- Dan Quisenberry

I found a delivery in my flaw.
- Dan Quisenberry

Kurt Bevacqua couldn’t hit water if he fell out of a boat.
- Tommy Lasorda

If you pitch to him, he’ll ruin baseball.
- Reds manager Sparky Anderson, on Willie McCovey

I got my faults but living in the past is not one of them ... there's no future in it.
- Sparky Anderson

I've seen the future, and it's much like the present, only longer.
- Dan Quizzenberry

- Terry Francona, on hearing that Kevin Youkilis had been called the Greek God of Walks:
I've seen him in the shower. That guy isn't the Greek god of anything.

Baseball is almost the only orderly thing in a very unorderly world. If you get three strikes, even the best lawyer in the world can't get you off.
- Bill Veeck

Kirk Gibson looks like he arrived tonight by raft.
- Vin Scully, on Gibson’s unkempt appearance at the plate

Today, for sound TV viewership reasons, all World Series Games are played after most people, including many of the players, have gone to bed.
- Dave Barry

I love sports. Whenever I can, I always watch the Detroit Tigers on the radio.
- Gerald R. Ford

Baseball players are smarter than football players. How often do you see a baseball team penalized for too many players on the field?
- Jim Bouton

They cannot beat them by outscoring them.
- Joe Morgan, on a game between the Red Sox and the Rays

As the governor of Louisiana once said, the only way Joe Morgan can lose his job is if he got caught in bed with a dead girl or a live boy.
- Michael Lewis, author of MoneyBall.

Hope you enjoyed this collection of baseball jokes and quotes! More like this here: