DATING TIP: never reveal how many cats you have
- snowjob ‏@canadasandra

In all honesty, my new dating service, "Well You're Not So Great Yourself" hasn't really taken off like I'd hoped.
- Andy Richter ‏@AndyRichter

I'm in an open relationship. Really open. He doesn't even know he's in the relationship.
- Emily ‏@EmInPortland

If you think your friends really know you, wait until you see who they try to set you up with.
- Erica ‏@SCbchbum

"Son, when I was your age we had to walk 50 miles uphill, in the snow with no shoes just to find out if hot, local singles were in the area."
- Sam Grittner ‏@SamGrittner

Someone's eventually going to slip, and I'll be there. My dating strategy.
- The Mice ‏@InsouciantMan

If you're getting serious about someone, check out what number their toaster is set at, because that's what you're going to live with.
- Just Bill ‏@WilliamAder

The best part of any relationship is when one of the people says "This may get a little weird."
- Jake Vig ‏@Jake_Vig

Airline just told my GF she has too much baggage & they've only known her a couple of  minutes.
- Woody ‏@WoodyLuvsCoffee

Hate to admit how many times I've broken up with someone and they didn't notice.
- Just Bill ‏@WilliamAder

Honey, sweetie and baby are the pet names for my TV remotes.
- Jane ‏@jane_bot

DATE: if you're gonna be on your phone the whole time then I'm leaving.
ME: (without looking up) ok then can I have the rest of your nachos?
- Br&on the Cow ‏@Brampersandon_

My girlfriend always nags me about our relationship needing more "communication" and "intimacy" and "keys to the home locks I just changed."
- Brian ‏@Black__Elvis

When someone asks me if I'm seeing anyone, I automatically assume they're talking about a psychiatrist.
- Shea ‏@Glorificus917

Sometimes I start thinking I might want a relationship, but then I find out my car repairs are minor and I snap out of it.
- Erica ‏@SCbchbum

A fun thing to do on a first date is to act all offended that she doesn't say the Pledge of Allegiance before eating.
- Guy Endore-Kaiser

One day I hope to meet that special someone who wants to prove a point to her disapproving parents.
- Ryan ‏@Mr57percent

Relationships are mostly guessing what the other person is thinking, and being wrong.
- moiste porque ‏@MoistPork

Him: I can't believe you are breaking up with me.
Me: Who are you again?
- Michele McTierney ‏@MicheleMMusic 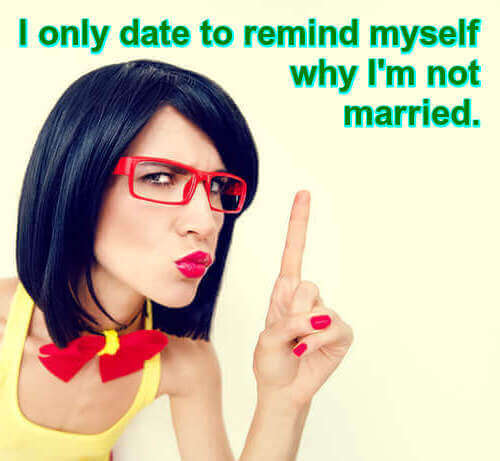 A can of soda exploded all over me without warning and it reminded me of an ex boyfriend.
- Jane ‏@jane_bot

Here's to all the single ladies! Throw your hands in the air!  [Thousands of cats hit the floor]
- Woody ‏@WoodyLuvsCoffee

[first date]
Her: It feels weird going to dinner with someone I’ve only seen in photographs.
Me: Same for me. I mean, unless binoculars count.
- John Lyon @JohnLyonTweets

I forgot the rules about what to do on a 3rd date so, long story short, I stole his wallet and his cat.
- Jedi Cheesy Grits ‏@JediGigi

When did you decide to always be single? My moment was when I realized I would literally never wait to eat until someone got home.
- Soph Benoit @1followernodad

It's not you, it's me and my preference for not dating psychos.
- John Lyon ‏@JohnLyonTweets

If you're dating a woman with a porcelain doll collection, I hope you have an exit strategy.
- Just Bill ‏@WilliamAder

The loudest silence in the world is the silence between a really old white guy dining across from his super young Asian girlfriend.
- Damien Fahey ‏@DamienFahey

It's been a while since I've been in a 'share chapstick' relationship.
- Jane ‏@jane_bot

Dating is collecting information about someone until you realize you don't like them.
- AmberTozer ‏@AmberTozer   [first date]

Me: That's a lovely anklet you're wearing. Where did you get it?
Her: State Parole Office. Thanks for bringing over dinner.
- John Lyon ‏@JohnLyonTweets

I've found it hard to sleep since I broke up with my girlfriend. I'm not upset, but when she moved out I went from 47 pillows down to just 1.
- Bread John ‏@Breadery

Ladies, when a guy carves your names in a tree. Don't go "awww."
Go, "Why the fuck did you bring a knife with you on our date?!" Then run.
- Groves ‏@XGroverX

Me: If Obi-Wan's clothes remained after Vader killed him, then why wasn't ghost Obi-Wan naked?
My date: [to waiter] Check, please.
- huntigula ‏@huntigula

Dreamt my boyfriend was cheating on me and he doesn't understand why I'm pissed off at him today. Boys are so stupid.
- I am CanadianCyn ‏@CanadianCyn

Done with dating sites. I'm now focusing on pizza delivery guys because at least I know they have a job, a car, and pizza.
- Just Linda 〰 @LindaInDisguise

[blind date]
HER: I love classic rock.
ME: (trying to impress) I've been to Stonehenge.
- Alien Skier @ClichedOut

Or go back from "Dating Quotes" to "Cute Quotes"