Funny 40th birthday sayings to help you glide, wide-eyed with pride, into the other side of 40. There's lots more to be tried, Clyde, so let this page be your guide. Enjoy the ride!

No woman should have kids over 40. Really, 40 kids is enough.

40 is when you finally get your head together and your body has other ideas.

Wow, you’re 40! You were such a happenin’ dude. What happened, Dude?

The forties are pretty much like the thirties, except it takes longer to recover from a big party. And you start to get more sensible tattoos.

Feeling over the hill at 40? No worries. Popping bubble wrap turns everybody into a little kid again.

At 40 some guy calls you “Darlin’” and it makes your day.

Plenty of people will turn 40 this year. And they'll whine and moan about it. Because that's what old people do.

Be wise with speed; a fool at forty is a fool indeed.
- Edward Young

Some birthday advice: don’t run upstairs right before you have to blow out 40 candles.
- Melanie White

There are no grown-ups....Everyone is winging it, some just do it more confidently.
- Pamela Druckerman

Turning 40?  You’re never too old to be immature.

Let’s raise a toast to your 40th. Here’s to prune juice!

Warning: 40 is the age when you can have obvious panty lines even with no panties.

A cool thing on your 21st birthday is getting carded at a bar. But it’s about a hundred times more fun when it happens on your 40th.

Just something to think about: The Roman Numerals for forty (40) are XL.

If you don’t get any respect when you’re 40, it means that you’re also a parent.
- Melanie White

If you want to feel young on your 40th birthday, just throw your party in an old folks’ home.
- Melanie White

Just because you’re 40, you don’t have to decide whether God exists...when you’re already worrying that the National Security Agency is reading your emails, it’s better not to know whether yet another entity is watching you.
- Pamela Druckerman

I've come up with a set of rules that describe our reactions to technologies: 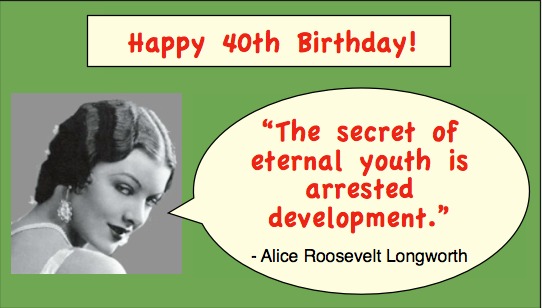 The key to being a young 40 is having friends much older than you are.
- Melanie White

If you’re 40 and slowing down isn’t an option, you might want to think twice about making U-turns.
- Melanie White

Having to blow out 40 candles on your birthday this year? I guess then we’ll know whether you truly are a windbag.
- Melanie White

When you’re 40, don’t worry about being over the hill. At least you’re not still climbing it.
- Melanie White

When you’re 40, you have so much to look forward to – like a little peace and quiet when all the kids move out.
- Melanie White

Being 40 doesn’t bother me nearly as much as being the parent of teenagers.
- Melanie White

When you’re 40, you can still do all the things you used to do – just not as fast.
- Melanie White

I used to like candles, but that was before I was 40, and they almost burned up my cake.
- Melanie White