Engineering Jokes
For Your Inner Geek

Clever, comical engineering jokes for engineers and friends of engineers. (Let’s face it, most of the friends are probably engineers too.) Here, for the personal enjoyment of your own inner geek, are my favorite free clean jokes about engineers.

A minister, a heart surgeon and an engineer were standing on the 6th tee behind an especially slow foursome of golfers. The engineer said impatiently, "These
guys are slow as molasses. They should let us play through!"

The surgeon agreed, "Amazingly slow, and I've got to get back to the office!”

The minister said, "I'll call the course marshal. We can ask him to speak to them.”

The marshal showed up and the minister asked, “What's with these guys in front of us? They take half an hour on each hole."

The marshal said, "Well, those guys are blind firemen. They saved our pro shop from a fire a few years back, losing their eyesight when the building collapsed. We let them play for free once a month."

The three complainers were quiet for a minute.

The minister finally said, "That's not only sad, but heroic. I’ll say a special prayer and take up a collection for them."

The surgeon added, "Good. And I'm going to contact an ophthalmologist and see if there's anything he can do for them."

The engineer said, "Why can't these guys play at night?"

Who Designed The Body?

Three engineering graduates were debating who designed the human body. One said, "It had to be a mechanical engineer, with all those joints."

The second said, "It was definitely an electrical engineer. Look at all those thousands of electrical connections in the nervous system."

The last one said, "Actually it was a civil engineer. Who else would run a toxic waste pipeline through a recreational area?" 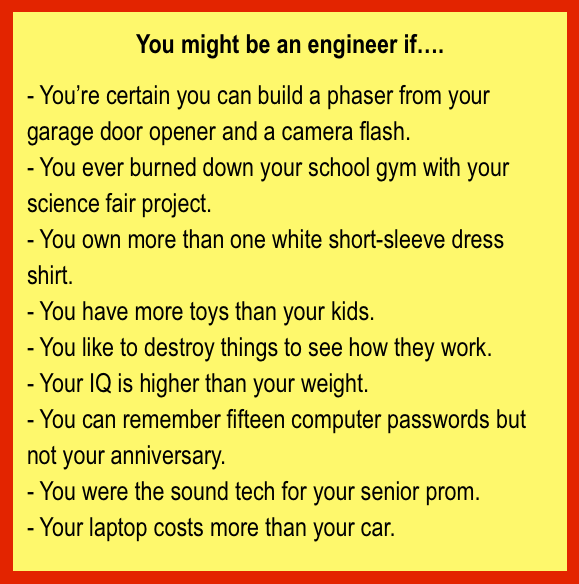 Engineering Jokes:
The Value Of Expertise

A truly talented mechanical engineer who could seemingly fix anything had happily retired.

One day his former company got in touch about a very expensive machine that it seemed no one could get working properly. They'd attempted every fix they knew of, without even partial success, and they were losing lots of money from the machine being down. As a last resort, they begged their retired former employee to come in and give it a shot.

It took him most of a day to inspect the giant piece of equipment. When he finished, he chalkmarked an X on a specific part of the machine, and let his former bosses know where it was.

A new part was ordered and once installed, everything worked beautifully.

Some time later they received a $50,000 invoice from the engineer for his work.

Astonished, the company bosses insisted on an itemized account of his fees.
He sent them another invoice which read:

Three engineers and three attorneys are booked on the same train to a convention. At the station, the attorneys buy three tickets, then are puzzled when the engineers only buy one ticket.

"How can all three of you guys get away with just a single fare?" asked the lawyers.

"Pay attention and we'll show you," they answer.

Once aboard, the lawyers find their seats. They watch as the three engineers squeeze themselves into a single restroom and lock the door.

Soon after the train is moving, a conductor comes by and punches each lawyer's ticket. Then he raps on the men's room door while saying, "Ticket, please."

The door cracks open slightly, and an arm extends a ticket out to the conductor. He punches it and exits to the next car.

The lawyers are impressed at the engineers' cleverness. After the convention, the attorneys figure if engineers can pull of this stunt, it should be no problem for lawyers.

So they buy a one return ticket for all three of them. To their amazement, the engineers don't even buy one ticket.

"How can you do this with no ticket?" they ask the engineers.

"Pay attention and we'll show you," they answer.

Once aboard, the attorneys all squeeze into one men's room.

Then the engineers fold themselves into a different one.

After the train is moving, one of the engineers exits the men's room and goes to the one where the attorneys are hiding. He gives the door a couple of sharp raps and says, "Ticket, please."