Engineer jokes to tickle and titillate, amuse and exhilarate, laugh till you hyperventilate, till your blues evaporate, and your mood rejuvenate. Without engineers there would be a lot less very funny jokes on our plate. 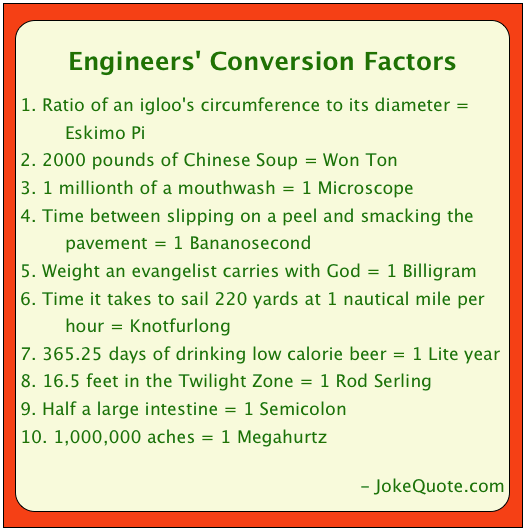 Three guys - an engineer, a doctor, and a painter - were debating the benefits of having a wife or a mistress.

The doctor pointed out that intimacy with his beloved wife was a great stress reliever, and gave him a lifetime of love to look forward to.

The painter argued that the spontaneity of a mistress inspired him to create mysterious and passionate works of art he could not otherwise achieve.

The engineer offered, "Actually, it's best to have both."

The engineer explained that if you have a wife and a mistress, they will both figure you're with the other one, so you can go to the lab and do some calculations.

A mathematician and an engineer found a gorgeous female waiting in their office. The girl announced, “Whoever can kiss me can have me. However, I have one condition. You can only come half the distance closer each time.”

The mathematician said, “Oh no, that will take till infinity. I’ll never get there.”

The engineer said, “Possibly not, but I can get close enough.”

During the French Revolution, a priest, a doctor, and an engineer were all sentenced to be guillotined. On the day of their executions, the priest was called up first to the scaffold. He lay with his head on the block, facing upward, looking at the sinister blade about to remove his head.

The priest shouted out a prayer and a blessing to everyone present, and asked for the mercy of almighty God. The guillotine was released, the blade sped downward, but somehow, miraculously, stopped abruptly just above his neck. The crowd buzzed with amazement, and the executioners declared it a miracle. The priest was obviously not meant to die, and was set free.

Next was the doctor’s turn. As he lay looking up at the enormous blade, he shouted out an apology, and asked to be forgiven. He declared that all he ever wanted to do was cure people, and his wealth was simply a result of his good work and attentive care. When the blade was released and fell, incredibly, the same thing happened. It came to a sudden halt just above his neck. The priest, who was still standing nearby, declared it was another miracle from God, and the good doctor must be released. And so he was.

Finally the engineer was brought up. He was put into the same position, facing upward, looking at the giant, razor-sharp blade about to separate his head from his body.

After a few seconds, he shouted, “Wait! I see what's wrong!”

An engineer was crossing a road one day when a frog called out to him and said, "Kiss me and I'll turn into a gorgeous woman."

He scooped up the frog and put it in his lab coat pocket.

The frog spoke again and said, "If you kiss me and turn me into a gorgeous female, I'll be yours and yours alone for a whole month."

The engineer lifted the frog out of his lab coat pocket, said nothing, and carefully put it back in his pocket.

The frog then cried out, "Please kiss me and turn me back into a woman! I'll be all yours and you can do ANYTHING you want with me!"

Once again the engineer opened his pocket, gently pulled out the frog, smiled, and carefully put it back.

Finally, the frog asked, "What are you doing? I'm really a gorgeous woman. I'll be all yours and do whatever you desire. Why don't you kiss me?"

The engineer said, "Look, I'm an engineer. I don't have time for a girlfriend. But a talking frog, now that's cool." 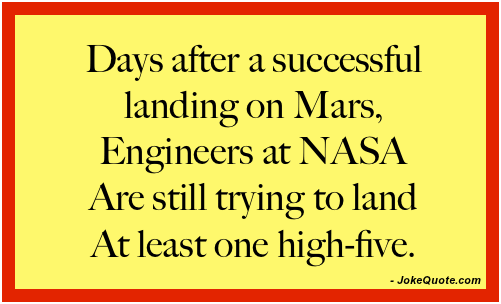 1. What is the smallest diameter of a branch on a live oak tree that will support a 15 pound 'coon?

2. Which of these vehicles will rust out soonest in your front yard when placed on blocks? A. '71 Ford LTD B. '70 Chevy Malibu C. '68 Plymouth Duster

3. If your cousin owns a still with a capacity of 40 quarts of shine per hour, how many car radiators does it take to condense the output?

4. A farmer's chain saw operates at 2500 rpm. The pine tree density in a harvesting plot is 260 per acre. The trees average 1.2 feet in diameter. The harvesting plot is 1.8 acres. How many cases of Coors Light will it take to finish the job?

5. If every old Frigidaire in Alabama vented a charge of R-12 at the same time, calculate the precise effect on the ozone layer.

6. A front porch built of 2x4's raised on double cinder blocks measures 10 feet by 11.5 feet. Two full kegs of Budweiser are placed in the center. When the porch gives way, how many coon dogs will be injured?

7. A man squats on 1.8 acres north of Dothan in a holler with an overall grading of 12%. The man's common law wife has 7 grown children and 29 grandchildren. Can the acreage contain enough single-wide mobile homes to have one for each child?

8. A one ton Dodge Ram supercab is carrying 1.5 tons of gravel down a 35 degree grade on a county road at 47 miles per hour. If the brakes fail, and the average vehicle density of county roads is known, what percentage of the time will crash into a pickup with a Confederate flag in the rear window?

9. A limestone quarry is in secondary use as a hazardous waste dump. The quarry employs 57 workers on the first shift. A toxic gas alert is sounded at one hour into the shift. How many cans of Skoal will be consumed before the explosion?

10. The gene pool of a town is declining at 4.1% per decade. If the population is currently 237, how many televangelists will it produce in the next generation?