Boss jokes that work to make your workday a little wackier. Humor quotes and funny stuff to give your work a wake-up call. Don’t call in sick. Call in funny! 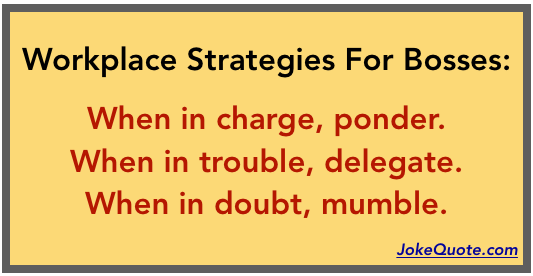 The main distinction between a boss and the Pope is the Pope only expects you to kiss his ring.
- Unknown Author

A power struggle with your boss is when she has the power and you have the struggle.
- Anonymous

To make a long story short, there's nothing like having a boss walk in.
- Doris Lilly

Got a new boss this week and I'm using suck up muscles I'd forgotten I had.
- Just Bill ‏@WilliamAder

My boss doesn’t believe money equals happiness. So instead of raises, he gives us Prozac.

Don’t stand around doing nothing. People will think you’re the boss.

The Law of Coffee: As soon as you get a cup of hot coffee, your boss will assign you a task that lasts just long enough for your coffee to go cold.

When you give birth to a great idea at work, your boss should give you 2 weeks of maternity leave.

There’s a rumor that Steve Jobs, having been a Buddhist, has been reincarnated as a factory worker on a sweatshop assembly line in China.

The fastest, most effective way to learn about servant leadership is to take a puppy for a walk.
- Greg Tamblyn

Tact is defined as the ability to tell your boss to go to hell and have him looking forward to the trip.
- Unknown Author

If your boss is getting you down, look at him through the prongs of a fork and imagine him in jail.
- David Brent

My boss is in the process of filling an open manager position. I asked him to please hire a man because women are crazy. He agreed with me. I got upset that he agreed. I’m pretty sure I unintentionally proved my point.
- Ruminations.com

A young job applicant was being interviewed for an entry level position.

His prospective boss asked, “Are you a smoker?”

“Not even a little,” said the young man.

“How about alcoholic beverages?”

The boss smiled and asked, “So you spend a lot of time with girls?”

The applicant said “No, not really.”

“So you don’t have any vices?”

“And what would that be?” the boss asked.

I asked the boss if I could get a raise, and he said, "Because of the fluctuational predisposition of your position's productive capacity as juxtaposed to the industry standards, it would be monetarily injudicious to advocate an increment." 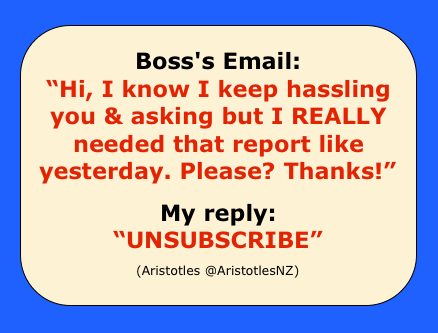 On a Roman warship, the galley boss looked over his slaves and shouted, “Today I have good news. All of you are getting extra food tonight.”

The slaves all looked at him in silence, except one decrepit old man in the back, who moaned, “Oh God, no, not again.”

A new slave next to him asked, “Why are you moaning?”

According to Native American wisdom, when you learn the horse you’re riding has died, the best thing to do is get a new horse.
Because of procedural considerations, however, the boss at my company has decided to try other strategies first. Like:

The sales chief, the HR chief, and the boss are on their way to lunch around the corner. They detour through an alley and stumble on a beat up but valuable looking brass container.

The sales chief picks it up and starts cleaning it with his handkerchief. Suddenly, a genie emerges out of a curtain of purple smoke.

The genie is grateful to be set free, and offers them each a wish.

The HR chief is wide-eyed and ecstatic. She says, “I want to be living on a beautiful beach in Jamaica with a sailboat and enough money to make me happy for the rest of my life.”

The sales chief says, “Wow! I want to be happily married to a wealthy supermodel with penthouses in New York, Paris, and Hong Kong.”

“And how about you?" asks the Genie, looking at the boss.

The boss scowls and says, "I want both those idiots back in the office by 2 PM."

There are two essential rules to management. One, the customer is always right; and two, they must be punished for their arrogance.
- Scott Adams (Dilbert)

The Dilbert Principle: The most ineffective workers are systematically moved to the place where they can do the least damage: Management.
- Scott Adams (Dilbert)

Or go back from "Boss Jokes" to "Hilarious Jokes: Work, Retirement, etc."