Rodney Dangerfield jokes don’t get enough respect! He was the king of self-deprecation. (With the possible exception of Jack Benny.) Here are my favorites of his funny quotations. Rodney died in 2004. His jokes never will. 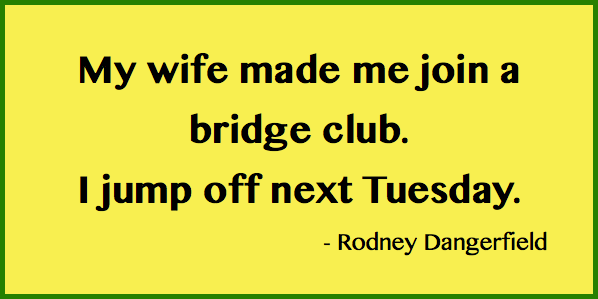 My wife and I were happy for 20 years. Then we met.

If it weren't for pickpockets, I'd have no sex life at all.

When I was a kid my parents moved a lot, but I always found them.

I drink too much. Last time I gave a urine sample there was an olive in it.

I haven't spoken to my wife in years. I don't want to interrupt her.

I'm at the age where food has taken over the role of sex in my life. In fact last night, I put a mirror over my kitchen table.

I told my psychiatrist that everyone hates me. He told me I was being ridiculous. I haven't met everyone yet.

My wife is always trying to get rid of me. Last night she told me to put the garbage out. I told her I already did. She told me to go keep an eye on it.

Steak and sex, my favorite pair. I get them both very rare.

I went out with a girl so fat, her belly button had an echo.

I found there was only one way to look thin: hang out with fat people.

I was so ugly, my mother breast fed me through a straw.

I was so ugly, when I was born, the doctor slapped my mother.

I was so ugly, when I'd play in the sandbox, the cat would keep covering me up.

I was so ugly, my dad carried around pictures of the kid that came with the wallet.

I was so ugly, my mother got morning sickness after I was born.

I was so ugly my mother used to feed me with a sling shot.

I wanna tell you I was ugly. I was so ugly, I went to the proctologist and he stuck his fingers in my mouth.

I went to the doctor and said, "Doc, every morning when I wake up and look in the mirror, I throw up. What's wrong?" The doctor said, "I don't know, but your eyesight is perfect."

I went to the doctor because I swallowed a bottle of sleeping pills. He told me to have a few drinks and get some rest.

I once dated a girl that was wild. She was so wild that one night she gave her phone number to the mechanical bull.

My wife, she's another one. Last night our house caught fire and I heard tell the kids, "Shhh, be quiet; you'll wake your father."

Boy was I poor growing up. If I wasn't a boy, I'd have had nothing to play with.

My parents hated me as a kid. My bath toys were a toaster and a radio.

I remember when I was kidnapped. They sent my parents a piece of my finger. My father said he wanted more proof.

My uncle's dying wish was to have me sitting in his lap. He was in the electric chair.

One day as I was coming home from work early, I saw a guy jogging naked. I said, "Hey buddy, why are you jogging naked?" He said, "Because you came home early."

My luck is so bad that if I bought a cemetery, people would stop dying.

I came from a real tough neighborhood. I put my hand in some cement and felt another hand.

I found there was only one way to look thin, hang out with fat people.

I get no respect. The way my luck is running, if I was a politician I would be honest.

I had plenty of pimples as a kid. One day I fell asleep in the library. When I woke up, a blind man was reading my face.

The shape I'm in, I could donate my body to science fiction.

I looked up my family tree and found out I was the sap.

I looked up my family tree and found three dogs using it.

I get no respect. I met the surgeon general. He offered me a cigarette.

I saved a girl from being attacked last night. I controlled myself.

I told my dentist my teeth are going yellow. he told me to wear a brown tie.

I went to a fight the other night, and a hockey game broke out.

I worked in a pet store and people would ask how big I would get.

My mother never breast fed me, she told me she only liked me as a friend.

My psychiatrist told me I was crazy and I said I want a second opinion. He said okay, you're ugly too.

My wife met me at the door the other night in a sexy negligee. Unfortunately, she was just coming home.

On Halloween, the parents sent their kids out looking like me.

One year they asked me to be poster boy - for birth control.

Some dog I got too. We call him Egypt. Because in every room he leaves a pyramid.

This morning when I put on my underwear I could hear the fruit-of-the-loom guys laughing at me.

We sleep in separate rooms, we have dinner apart, we take separate vacations - we're doing everything we can to keep our marriage together.

What a dog I got, his favorite bone is in my arm.

What a kid I got, I told him about the birds and the bees and he told me about the butcher and my wife.

My old man never liked me. He gave me my allowance in traveler's checks.

I dated a girl. She called me on the phone and said, "Come over; there's no one home." I went over, THERE WAS NO ONE HOME!

My wife likes to talk during sex. Last night she called me from a hotel.

I like to go to bed with 2 girls. That way when I fall asleep, they can talk to each other.

Never tell your wife she’s lousy in bed. She'll go out and get a second opinion.

I have good looking kids. Thank goodness my wife cheats on me.

With me, nothing goes right. My psychiatrist said my wife and I should have sex every night. Now, we'll never see each other!

With my wife I don't get no respect. I made a toast on her birthday to 'the best woman a man ever had.' The waiter joined me.

My wife wants sex in the back of the car, and she wants me to drive.

When I got divorced, it was group sex. My wife screwed me in front of the jury.

Last Christmas I got no respect. In my stocking I got an odor eater.

Just not the "No Respect" button.

Go back from "Rodney Dangerfield Jokes" to "Really Funny Jokes"