Jesus jokes have been popular since Roman times. Except with Spanish Inquisitors, Puritans, and anybody else with a sense of humor the size of a mustard seed. As G. K. Chesterton said, “It is the test of a good religion whether you can joke about it.”

Spotted On A Bumper Sticker:

Jesus and St. Peter are at the Pearly Gates, and there’s a long line of souls waiting to get in. Jesus spots an old man far down the line, and thinks he looks familiar.

When the old man finally gets to the front, Jesus asks, “Excuse me, sir. Where do you come from?”

“I was a carpenter,” replies the old man.

Jesus, growing excited, asks, “Did you have a son?”

Jesus jumps up, spreads his arms, and says, “Father?”

The old man squints for a minute, then says, “Pinocchio?”

Of course Jesus believed in evolution. Otherwise he would have said, “Now don’t do a thing until I get back.”
- Swami Beyondananda (Steve Bhaerman)

Well, I just said that Jesus and I were both Jewish and that neither of us ever had a job, we never had a home, we never married and we traveled around the countryside irritating people.
- Kinky Friedman

Jesus: "Unless you become like children you will not enter heaven."
*Gets hit by a water balloon*
Jesus: "That's not what I meant, guys."
- Mind if I interject? ‏@gianni_bcn

Two men came to the door asking if I'd found Jesus. I had no idea he was missing and I suddenly got nervous thinking I might be a suspect.
- Ham on Wry ‏@realHamOnWry

*Family Feud*
"Name something parents do that embarrasses their children!”
*Jesus buzzes*
“Flood the earth, killing everyone.”
- Camden's finest ‏@anbrll00

[Jesus applying for a job]
What's your greatest strength?
I am the way & the truth & the life.
Any practical skills?
Um..carpentry, I guess.
- Viktor Winetrout, Jr ‏@Cpin42

A Sunday School teacher wanted to find out if her young students understood the concept of Easter.

She asked the class, “Who can tell me why we celebrate Easter?”

“It’s when baby Jesus was born!” said one little boy.

“It’s when we get candy for tick-or-treating!” said a little girl.

“I know, I know!” said little Johnny, raising his hand.

“Okay, Johnny, tell me about Easter,” said the teacher.

Johnny replied, “It’s when Jesus died and was hung on the cross, then buried in a cave. And three days later he came out and if he sees his shadow we have six more weeks of winter.” 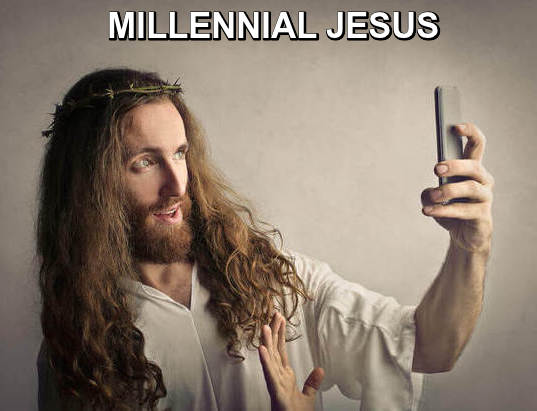 A woman takes her teenage daughter to the doctor. The doctor inquires about the purpose of their visit.

The woman explains that her daughter is having cravings, gaining weight, and getting sick every morning.

The physician examines the daughter thoroughly, then tells the mother, "I’m sure this is not what you want to hear, but your daughter is pregnant. I’d estimate she’s about three and a half months along."

The mother is shocked, "Pregnant? Impossible! She’s never even been alone with a boy! Isn’t that true, honey?"

The daughter agrees. "No, Mom! I've never even been kissed!"

The doctor turns, and stares quietly out the window.

After several minutes of silence the mother is growing agitated.
"Doctor, please, what are you thinking?"

The doctor turns back and says, "Well, the last time something like this occurred, three kings on camels rode in from afar, and a star rose in the east. There’s no way I'm going to miss it this time."

A thief was committing a midnight break-in at a fancy home. While rifling through some drawers, he heard the words, "Jesus is watching you!"

He turned but saw nobody.

A second later he heard it again. "Jesus is watching you!"

Now he could see the voice was coming from a parrot. Relieved, he asked, "What's your name, parrot?"

"Methuselah?" laughed the thief. "That's a dumb name for a bird. Who named you that?"

The parrot replied, "The same guy that named the doberman behind you Jesus."

Jesus Joke:
"Another One For The Savior"

A square dance champion limped into the food tent at the county fair. With a pained expression on his face, he managed to get his bad leg over a stool at the counter.

The server said well, yes, it was in fact Jesus himself. So the dancer ordered an extra Coke for Jesus.

Next, an aging, hunched over senior citizen wearing a neck brace shuffled in. He stood wearily by the counter and ordered a glass of milk.

A minute later he too noticed Jesus at the end of the counter and bought another glass of milk, asking the server to give it to Jesus.

Seconds later, a noisy redneck with both arms in slings stumbled through the door. He yelled to the counter girl for a tall, cold, sweet tea and a straw.

He immediately spotted Jesus, and being a God-fearing redneck, bought a sweet tea for the Savior.

A half hour later, Jesus rose to leave.

On his way out, he touched the dancer on the shoulder and said, "Thank you for your charity. You are now healed." The dancer’s legs immediately felt stronger than ever, and he proved it by happily dancing a jig.

Jesus then placed his palm on the senior’s forehead, looked in his eyes, and said, "For your compassion, you too are healed." The senior’s neck brace flew off, and for the first time in years he stood up straight as a tree and laughed in delight.

Then Jesus moved toward the redneck, who stumbled backward and begged, "Not me, not me! I'm drawin' disability!"