Funny Short Story:
Where Is The Bathroom?

Funny Short Story:
Where Is The Bathroom?

In a tiny Paris apartment, the bathroom is located in the last place you'd ever think to look. This leads to some hilarious dinners, and a brilliant solution.

Chapter 3
Ou'est la Salle de Bain?
(Where Is The Bathroom?)

My sister and her husband joined the Peace Corps the year after they got married. They were sent to the Ivory Coast, a former French colony. When their two year African hitch was up they had become fluent in French, they had the little bit of money the Peace Corps gave them, so they thought, Let's go live in Paris!

But all they could afford in Paris was a tiny, two-room apartment. And the operative word here is "tiny." One room was a bedroom, with a double bed in it, and just about enough room to walk around it. That was the whole bedroom.

The other room was the kitchen. A little, efficiency-type kitchen. And that was it, the whole apartment.

So, you might be thinking, Where was the bathroom?

The bathroom was not down the hall. Nor was it shared with another apartment.

The bathroom was in the kitchen.

In a corner of the little kitchen was a tiny alcove with a rickety little door in front of it. Inside the alcove was a commode, and above the commode was a shower head.

That was it -- the whole bathroom. But it was so small that when you sat on the commode your knees kept the rickety little door from closing.

Also in the little kitchen was a small, square table. And if four people, who weren't very big, arranged themselves just exactly right, they could squeeze in around it and have a meal together. This happened often because nobody had any money.

So you might be thinking, What if somebody had to go to the bathroom during dinner?

Now here's what I consider a great example of creative problem solving. If someone had to go during dinner, the person would move to the alcove, and assume the position behind the partially closed rickety door. Then the rest of the people at the table, which was maybe an arm's length away, would pound on the table, and sing at the top of their lungs, to give the person some privacy. This went on for as long as it took, until they got the "all clear." (Flush, gurgle.)

Needless to say, this made for some funny dinners.

And because the alcove was about the size of a phone booth (or smaller) the code for this became, "I gotta make a phone call."

Of course the next question was, "Well, is it local or long distance?"

(In other words, how long are we gonna be singing?)

We hope you enjoyed this chapter from our new funny short story collection,
Normally Peculiar 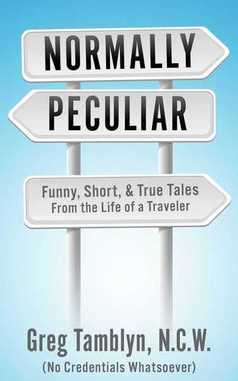 It's one of 23 true stories that leave you smiling inside and out.

"I finished your book a few days ago and want to thank you. The only thing you could have done to make it better was make it longer!"
- Karen Lowry

Here's another chapter from our funny short story collection:

The Dangers of Networking (It's Not Just Lunch)

Or go back from "Funny Short Story: Where is the Bathroom" to "Normally Peculiar"