Funny inspirational quotes to lift you into the laughter zone. Humorous quotations that put the fun in inspiration. Use 'em on anybody who needs ‘em, including you! 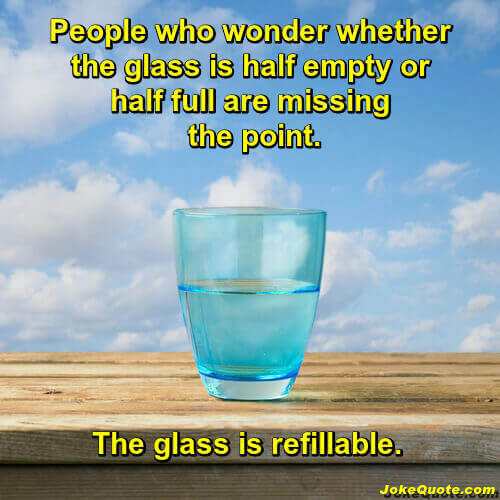 It is bad to suppress laughter. It goes back down and spreads to your hips.
- Fred Allen

You can't have everything. Where would you put it?
- Steven Wright

The trouble with being punctual is that nobody's there to appreciate it.
- Franklin P. Jones

If you are afraid of being lonely, don't try to be right.
- Jules Renard

When you battle with your conscience and lose, you win.
- Henny Youngman

You might as well fall flat on your face as lean over too far backward.
- James Thurber

Never hold discussions with the monkey when the organ grinder is in the room.
- Winston Churchill

Money won't make you happy ... but everybody wants to find out for themselves.
- Zig Ziglar

People who fly into a rage always make a bad landing.
- Will Rogers

Always do right. This will gratify some people and astonish the rest.
- Mark Twain

When I hear someone sigh that life is hard, I am tempted to ask, ‘compared to what?'
- Sydney Harris

One thing you will probably remember well is any time you forgive and forget.
- Franklin P. Jones

When you're out of willpower you call on stubbornness, that's the trick.
- Henri Matisse

Good advice is something a man gives when he is too old to set a bad example.
- La Rochefoucald

If you let your head get too big, it'll break your neck.
- Elvis Presley

The road to success is dotted with many tempting parking spaces.
- Will Rogers

If you're going through hell, keep going.
- Winston Churchill

A peacock that rests on his feathers is just another turkey.
- Dolly Parton

You must pay for your sins.
If you have already paid, please ignore this notice.
- Sam Levenson

I know worrying works, because none of the stuff I worried about ever happened.
- Will Rogers

Hating people is like burning down your own home to get rid of a rat.
- Harry Emerson Fosdick

The sun, with all those planets revolving around it and dependent upon it, can still ripen a bunch of grapes as if it had nothing else in the universe to do.
- Galileo Galilei

Leadership is the art of getting someone else to do something you want done because he wants to do it.
- Dwight Eisenhower

A good time for laughing is when you can.
- Jessamyn West

In theory, there is no difference between theory and practice; In practice, there is.
- Chuck Reid

Live each day like it's your second to the last. That way you can fall asleep at night.
- Jason Love ‏@jasonlovetwit

It's okay to look at the past and the future. Just don't stare.
- Anonymous

There are two ways to pass a hurdle: leaping over or plowing through... There needs to be a monster truck option.
- Jeph Jacques

Laughter is a weapon of mass construction.
- Kat Caverly

You can't wait for inspiration. You have to go after it with a club.
- Jack London

There is a dearth of mirth on the earth.
- Bill Nelson

Even a stopped clock is right twice every day. After some years, it can boast of a long series of successes.
- Marie von Ebner-Eschenbach

Follow your dreams, except for the one where you're naked in church.
- Rev. David Ault

It's good to shut up sometimes.
- Marcel Marceau (famous mime)

You must learn from the mistakes of others. You can't possibly live long enough to make them all yourself.
- Sam Levenson

It's a strange world of language in which skating on thin ice can get you into hot water.
- Franklin P. Jones

Hegel was right when he said that we learn from history that man can never learn anything from history.
- George Bernard Shaw

Honest criticism is hard to take, particularly from a relative, a friend, an acquaintance, or a stranger.
- Franklin P. Jones

Never interrupt your enemy when he is making a mistake.
- Napoleon Bonaparte

Anyone who takes himself too seriously always runs the risk of looking ridiculous; anyone who can consistently laugh at himself does not.
- Vaclav Havel

I never did give them hell. I just told the truth, and they thought it was hell.
- Harry S Truman

Against the assault of laughter nothing can stand.
- Mark Twain

I am an old man and have known a great many troubles, but most of them never happened.
- Mark Twain

I was gratified to be able to answer promptly, and I did. I said I didn't know.
- Mark Twain

If you tell the truth, you don't have to remember anything.
- Mark Twain

There are basically two types of people. People who accomplish things, and people who claim to have accomplished things. The first group is less crowded.
- Mark Twain

Write a wise saying and your name will live forever.
- Anonymous

Or go back from " Funny Inspirational Quotes" to "Cool Quotes"

Or go back to the Home Page:  "Funny Jokes, Funny Quotes, Funny Sayings"