If you find death unsettling, disturbing, or scary, these funny death quotes and sayings will help you laugh about it now so you can die laughing later.

It's not that I'm afraid to die. I just don't want to be there when it happens.
- Woody Allen

I’m a Frisbeetarian. We believe that when you die, your soul goes up on the roof and you can’t get it down.
- Steve Martin

I have a positive approach to death. I'm positive I'm going to die. You know, sometime.
- Greg Tamblyn

Little boy to old man:  “Yeah, well, I didn’t believe in reincarnation when I was your age either.”
- (from a cartoon by Dave Coverly, speedbump.com)

There’s a rumor that Steve Jobs, having been a buddhist, has been reincarnated as the 14 millionth Daily Laborer, working on a sweatshop assembly line in China.
- Unknown Author

True: The guy who wrote 100 Things to Do Before You Die (like running with the bulls in Pamplona, bungee-jumping) accidentally died after tripping on his hall carpet and hitting his head on the wall in his home. He was 47.

I have a paper cut from writing my suicide note. It's a start.
- Steven Wright 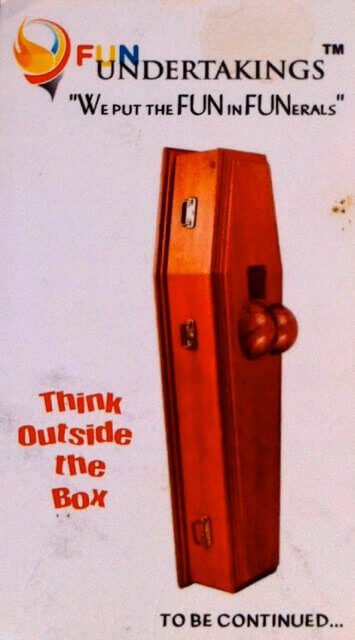 What I want at my funeral is an actual boxing referee to do a count; and at 5, just wave it off and say, ‘He’s not getting up.’
Garry Shandling

I had a friend who was a clown. When he died, all his friends went to the funeral in one car.
- Steven Wright

In David Brenner’s last request, he asked that $100 in small bills be placed in his left sock ‘just in case tipping is recommended where I’m going.’
- NY Times

I didn't attend the funeral, but I sent a nice letter saying I approved of it.
- Mark Twain

If you don't go to other men's funerals, they won't go to yours.
- Clarence Day

No matter how rich you become, how famous or powerful, when you die the size of your funeral will still pretty much depend on the weather.
- Michael Pritchard

Things you don’t want to hear at the reading of the will:
“First, your Uncle Walter apologizes for betting everything on the 5th race at Belmont.”
- Greg Tamblyn

Why must important conversations come so late. Have you noticed how many people apologize to corpses?
- David Bren

Everybody has to die, but I always believed an exception would be made in my case.
- William Saroyan

What I look forward to is continued immaturity followed by death.
- Dave Barry

Eternity’s a terrible thought. I mean, where’s it all going to end?
- Tom Stoppard

If no one knows when a person is going to die, how can we say he died prematurely?
- George Carlin 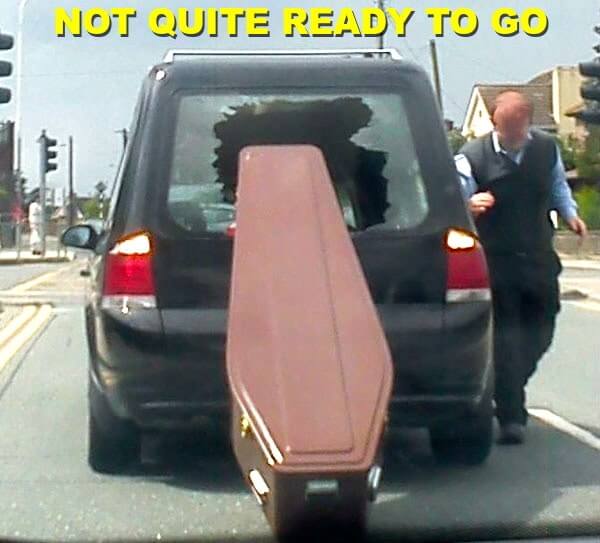 If there is, in fact, a Heaven and a Hell, all we know for sure is that Hell will be a viciously overcrowded version of Phoenix.
- Hunter S. Thompson

If there is a Hell, it is modeled after Junior High.
- Lewis Black

Not sure if there is a Hell, but if there is it will probably be indistinguishable from a food court.
- Andy Borowitz

When I die, I want to die like my grandmother: who died peacefully in her sleep. Not screaming like all the passengers in her car.
- Author Unknown

If death is anything like sleep, it's going to be interesting when I frequently rise from the grave to pee.
- Bridger Winegar

If you die in an elevator, be sure to push the 'up' button.
- Sam Levenson

The reports of my death have been greatly exaggerated.
- Mark Twain

Death is not the end. There remains litigation over the estate.
- Ambrose Bierce

I am ready to meet my maker, but whether my maker is prepared for the great ordeal of meeting me is another matter.
- Winston Churchill

If Shaw and Einstein couldn't beat death, what chance have I got? Practically none.
- Mel Brooks

I'm one of those people who believes that if I'm very good in this life I'll go to France when I die.
-  Marlon Brando

In one of her final interviews, author Hilary Mantel was asked if she believed in an afterlife. She did, she told The Financial Times, although she couldn’t imagine how it might work. “However, the universe is not limited by what I can imagine,” she said.

At my funeral I want a magician to saw my coffin in half or I'm not going.
- william ‏@Moldy_Jellybean

"Asphyxiate' would be worth like a million points..." I thought to myself as I lay choking on a Scrabble tile.
- GoaT FacE ThrillA ‏@EndhooS

If you ever see me on my death bed, please take me off my death bed & move me to my alive bed thx
- Grant Tanaka ‏@GrantTanaka

Pretty sure that 10 minutes after my death my wife will hold a seance to ask me where the TV remote is.
- Rick Aaron@RickAaron

He died doing what he loved, snoring.
- Obviously Everyone… @OMGSoOverIt

Do lazy people go to Heaven or do they send someone to pick us up?
- DMAC15310 ‏@mixedNUTgallery

Sorry I started the wave at your Grandma's funeral.
- Brad Broaddus ‏@BradBroaddus

[estate planning]
Advisor: Have you thought about an end-of-life gift?
Me: I'll be dead, that's a big enough gift for everyone.
-PunchyK ‏@AnkCoupleTO

More Like This? Check out these Funny Tombstone Sayings

Or go back to Cool Quotes

Or go back to the Home Page