Mirth Madness! Funny basketball sayings - full court humor. Go ahead, fill your bracket. We got plenty of game. No trash talk. Nothing but net! Swipe a few of these and your pool will be cool.

A team should be an extension of a coach’s personality. My teams are arrogant and obnoxious.
- Coach Al McGuire

True: When Austin Peay University had a player named Fly Williams, the students would chant, “The Fly is open! Let’s go Peay!”

UK and Louisville are in the commonwealth of Kentucky, where basketball is an optional box for religious affiliation.
- Dana O’Neill, ESPN

I have contempt for a game [football] in which players have to wear so much equipment. Men play basketball in their underwear, which seems just right to me.
- Anna Quindlen

The referees request that regardless of how terrible the officiating is, don’t throw stuff on the floor.
- Billy Tubbs, when asked by the refs to address the crowd about throwing debris on the court. (Billy got a technical.)

The best thing about freshmen is they become sophomores.
- Al McGuire

The secret is to have eight great players, and four others who will cheer like crazy.
- Jerry Tarkanian

I hope he comes out for basketball.
- Kansas Coach Phog Allen, when told that Wilt Chamberlain had decided to go to Kansas 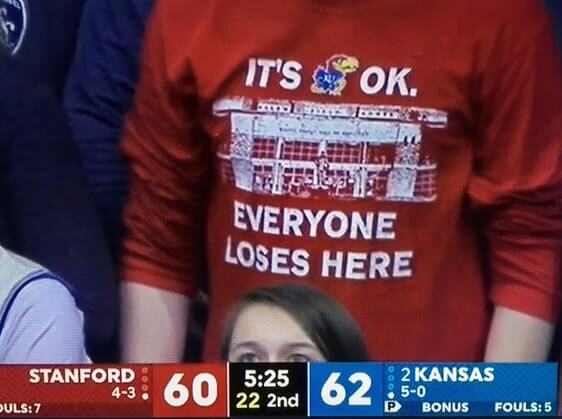 I've never had major knee surgery on any other part of my body.
- Winston Bennett, University of Kentucky player

We're going to turn this team around 360 degrees.
- Jason Kidd, after joining the Dallas Mavericks

Nobody roots for Goliath.
- Wilt Chamberlain

I really appreciate this award, but I don’t ever want to win it again.
- Marcus Denmon, on winning the Sixth Man of the Team award for the Missouri Tigers

I’m a coach who believes in execution. Whenever I see [that player] shoot free throws, I want to execute him.
- Rick Pitino

He makes plays you can’t coach, and he makes plays that look like he’s never been coached.
- Bill Self on point guard Tyshawn Taylor

You have to treat it a lot like the sun. Looking at it for more than a few seconds is dangerous to your health.
- Jamar Samuels, on looking coach Frank Martin in the eye

When asked if Nate Archibald's "dominance" of the ball could hurt the Kings (his own team), Oscar Robertson looked amazed, then said, "The only way his style could hurt them is if he played against them."

(John) Wall is an excellent passer, a pretty good rebounder and a decent defender, but his ability to make a defense collapse into itself like a dying star makes him the best player in the country.
- Andy Glockner, Sports illustrated

I always like to get transfers, especially from the Pac-10. They already have their cars paid for.
- Jerry Tarkanian

I wouldn’t bank on it. I would still say, right now, he’s probably doubtful, but that could become questionable. But I don’t think it’s probable.
- Bill Self, on an injured player

Jeremy Lin may be the first person with an economics degree from Harvard who is doing something positive with his life.
- Andy Borowitz @BorowitzReport

I'd watch basketball more often if one player from each team had to carry a pool noodle at all times.
- Zachary? ‏@GreenishDuck

Sorry, when I said I have the stamina of an NBA player in bed I meant I take 10 timeouts in the final 2 minutes.
- Terry F ‏@daemonic3

Norm Stewart to Roy Williams: "We shouldn't stand too close together.”
Roy Williams: “Why not?”
Stewart: “Well, there's a lot of your fans that don't like that you invited me here, and a lot of my fans don't like it because they didn't want me to accept the invitation. So don't let them get us with one shot." 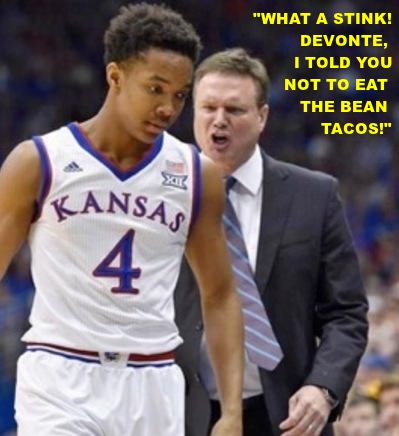 [This is] a Sweet 16 that's more stacked than a Cuban election.
- Rick Reilly, ESPN.com, on the 2012 March Madness

Jae Crowder has seven siblings, one of which you'll notice on television. He's just slightly larger than a Red Roof Inn.
- Rick Reilly, ESPN.com, on the Marquette post man

To keep in shape, Jae Crowder pulls SUVs with ropes. When SUVs aren't available, he uses his brother.
- Rick Reilly, ESPN.com, on the Marquette post man

The Badgers will try to slow it down against Syracuse. The Badgers run less than $50 panty hose.
- Rick Reilly, ESPN.com, on Wisconsin’s Badgers

Go back from "Funny Basketball Sayings" to "Really Funny Jokes"