Clean blonde jokes for the enjoyment of all would-be blondes, and real blondes with a sense of humor.

Question: when blondes have more fun, do they know it? 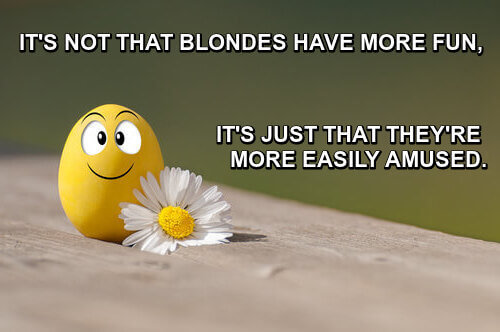 A blonde calls American Airlines. She asks how long it takes to fly from Miami to Los Angeles.

The blonde says, “Thank you!” and hangs up.

At a small club in the midwest a ventriloquist is doing his show, which includes a whole stream of jokes about blonde stupidity.

After about a dozen blonde jokes, a blonde woman yells out, “That’s it. I’ve had enough of your cheesy comedy. I’m tired of being stereotyped by lousy comedians like you. All you can do is make fun of people’s appearance. What does someone’s looks have to do with her worth? I’m fed up with being laughed at because of the color of my hair, and people at work thinking I’m stupid because idiots like you perpetuate a hurtful, denigrating stereotype. You’re an insult to women everywhere.”

The room is silent for a minute, then the entertainer tries to explain.

But before he can get two words out, the blonde says, “Shut up, mister. This is between me and that midget on your lap.”

A blonde and a brunette meet for a glass of wine. The 7:00 evening news is on TV and there is footage of a man about to jump to his death from the Golden Gate Bridge.

A couple of minutes later the man jumps off the bridge, and the blonde gets $20 out of her purse to give the brunette.

The blonde replies, “Well honestly, I saw it too. But I didn’t think for a second he’d do it again.” 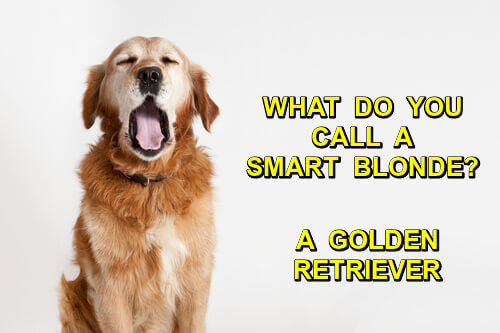 A blonde goes into a Louisiana shoe store and ask the price of some alligator shoes.

“I can’t afford that!” says the blonde. “How about a discount?”

The salesman tells her they’ve just come in from Italy, and there’s no way he’s discounting them. But the blonde won’t give up and keeps pestering him to mark them down.

Finally the guy is exasperated and says, “Look, there an alligator pond a block from here. Just go catch yourself one and you won’t have to pay anything.”

After a couple of hours the salesman starts to feel guilty and wonders if maybe she got killed. He walks over to the pond and sees the blonde surrounded by dead alligators.

She looks up and sees the salesman and yells, “Is this some kind of practical joke? Not ONE of these alligators has shoes on!”

A group of women tourists is visiting London. They charter a bus to go to Hampton Palace, and for some reason all the blondes sit on the upper level.

The redheads and brunettes are all sitting below.

After a couple of miles the tour leader, sitting on the bottom, goes up to the top level to see how they’re doing. She finds all the blondes sitting tight-lipped, eyes wide open, and terrified looks on their faces. Their hands are gripping the seat-backs with white knuckles.

“What’s wrong with you ladies?” she asks. “This is great scenery. Everybody downstairs is enjoying the ride!”

“Sure,” said a blonde in front. “That’s because you have a driver!” 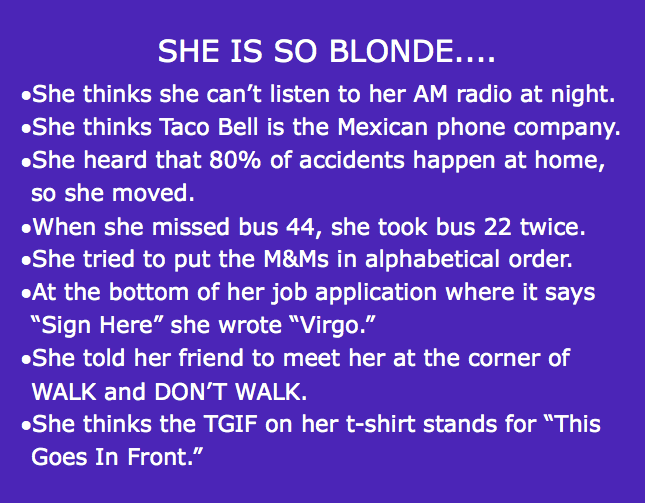 Seven blondes and a brunette were crossing a rickety bridge over a deep mountain gorge, when the bridge started to fall apart.

Within minutes all the women were hanging onto a single rope spanning the ravine, and the rope seemed to be giving way under the weight. They realized that one of them would have to volunteer to let go, in order to save the others.

After a minute, the brunette offered to give her life for the rest of the group.

She said some final words that deeply touched the all blondes, and they responded by clapping.

As he approached the car, he could see her sitting in the front seat. The car windows were up, the doors were locked, and she had her fingers intertwined behind her head.

He yelled through the door and asked what was going on. She yelled back that she’s been hit in the back of her head by a gunshot, and she was trying to hold her brains in.

The husband called an ambulance, and when the EMTs arrived they had to break a car window to get in because the blonde would not move one of her hands away from her head, even to open the door.

When they leaned her forward and lifted her hands from her head, they could see she had a golf-ball sized piece of raw bread dough stuck there.

The heat in the car had caused a biscuit dough canister to explode. She thought it was a gun, and that the dough hitting her in the head was a bullet.

When she reached back to feel her head, she thought the dough was her brains falling out. 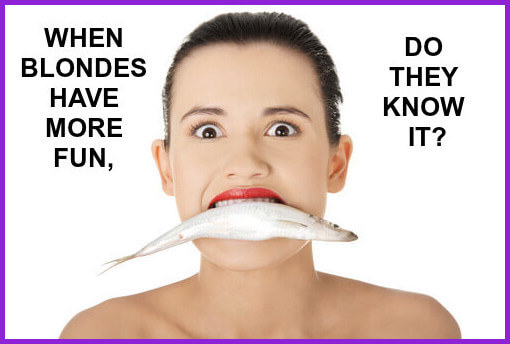 Go back to "Clean Funny Jokes: All Flavors"